Michael Nau & The Mighty Thread | Self Titled | "Less Than Positive"


Current Mood,
eightychoices.
Posted by 80choices at 10:15 AM No comments:

If you don't like Manu, you don't like hoops, regardless of which team is yours. Ginóbili retired yesterday as an all-time competitor and future hall-of-famer. He's one of my favorite international players, especially having not played college ball stateside —Hakeem & Nash did; as did Duncan who is from the US Virgin Islands if you want to get snarky. Manu is a 4x NBA Champ and also spearheaded Argentina to Olympic Gold! His resume is sterling, his on-court toughness, one of a kind. Craftiness, a fearless attitude and that left hand, shattered many opponents. Manu changed the game. He'll most likely ride off into the sunset just as uniquely as he played the game of basketball.

eightychoices.
Posted by 80choices at 2:50 PM No comments: 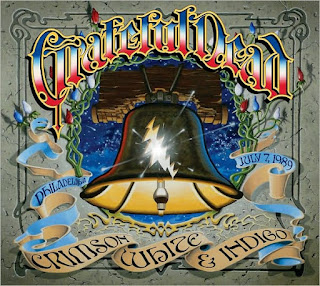 The year, 1989. The Place, JFK Stadium, Philadelphia. This would be the last concert held there, days later it would be demolished. And let me just say, The Dead demolished the audience with an all-time throw down.

Officially released in 2010 on Grateful Dead Records, Crimson, White & Inidigo was the live title, taken from the song "Standing On The Moon." On August 1st of this year, the amazing video was again released for Jerry's Birthday. Lucky me, I was invited by a great buddy to watch it on the big screen at the Clover Theater in Cloverdale, CA.

First set highlights included a driven "Little Red Rooster." Bob and Jerry were making their guitars sing while both playing slide. Another gem was Dylan's, "Stuck Inside of Mobile with the Memphis Blues Again." But the hammer that pounded everybody was the emotional "Blow Away" that Mydland somehow unearthed to close the set. Jerry walked over to check in with him prior to his heartfelt and off the cuff rendition. Brent was on fire, taped to a keyboard were photos of his kids,  likely helping to power his performance.

Moving into the second set I distinctly remember the "Fire on the Mountain," followed by "Estimated Prophet" which blended into "Standing on the Moon." The "Rhythm Devils" break was phenomenal. Mickey was manipulating The Bar and the two percussionists made sounds that could only be described as futuristic. "Turn On Your Love Light" closed it down before the band would return for a rousing "Knockin' on Heaven's Door."

I tend to really dig the early 70's and late 80's of The Dead's infinite cannon. This show, which I was not intimately knowledgable of, immediately rose to become one of my favorites. I avoided listening to this show on Archive once I'd been invited. I was glad to have watched the sliver screen light up with a sensational show by the Grateful Dead clicking on all cylinders.

Hen House and Crooked Goat teamed up for a collaborative take on a Brut IPA. I was told that the only difference was during the dry-hopping process, which was done at each breweries' facility. The result, Animal Friends, the label is an obvious nod to Orwell's Animal House.

For the sake of this review, I will be describing the Hen House concoction. They distributed this limited release in a 4-pack of pint-sized cans, which I was lucky enough to score. Crooked Goat's take was only available in-house.

An almost opaque yellow assembled into the glass, as if a bail of hay was turned into liquid. Pineapple punched out of the can, overwhelming the front end. A decent head dissolved quickly once poured. Tasting however provided a different story. It was not as juicy or fruity as the nose suggested. Dryness prevailed early and became more noticeable on the finish. Cheers to the local craft brewers who not only produce great beer, but create an energy within our community. Animal Friends (6.3%) may have escape your enjoyment this time. But you can still check out Hen House and Crooked Goat.

Cheers,
eightychoices
Posted by 80choices at 11:26 AM No comments:


A cousin of mine, who is both a best friend and an older brother of sorts, turned me on to this beautiful album back in June. I cannot wear it out. The reason for our reunion may have been bittersweet (Uncle Bill was truly one of a kind and I am beyond blessed to be influenced by you. I MISS YOU!) Thanks to those who make me feel sane. Chuck Johnson's music is meditative gospel.

Postscript: Aretha Franklin passed today and it made me feel. I love Aretha's music. We're all wiser for sharing our time on earth with her, we're lucky to be honest. She is soul. Thank you Aretha for making this world a better place. She will always be a treasure, one that makes us all rich. Rest in peace.

Guess who's back on the case? Those weathered and dedicated detectives from Brew Detective, I mean, True Detective. Joking and namesakes aside, Hen House has crafted another unique and tasty IPA, Time Is A Flat Circle. The name is pretty cool, uncanny if you will.

Nosing around you'll unearth fruity-melon and muted peppercorn scents. Glowing and dense this beer means business. The mouth feel is a definite plus. Bitterness lingers though the finish as it softens. Muddled together but not lost, early flavors coalesce. I noticed a grainy earthiness, which put the focus squarely onto the hoppy bitterness. Time Is A Flat Circle adds nice diversity to the Hen House lineup, it's different and I like it.

Cheers,
eightychoices.
Posted by 80choices at 11:21 AM No comments:

Yolanda | "Following Me" | What Vision

Local independent music is always a worthy endeavor, it becomes part of your life when the music is good to great. Yolanda is an up and coming band that is the brainchild of a creative talent now living in Petaluma after some years in LA. Yolanda's initial offering is a five song EP that draws from the past and the future, creating a sonic collage of energy.

What Vision oozes with thoughtfulness. "No Great Shakes" emits a feeling of Petaluma-like fog. "Goldtimes" beams like sunshine, feeling more like southern California. I especially dig the vocals on this track, aided by creative drumming and coaxed along by subtle guitar work. The final offering on Side 1 is "Drivver_New Waltz." New Waltz is frantic, resembling a sprint, somehow blending 80's UK synth-pop to the fuzziness of surf-psyche. I'm all in on New Waltz.

Side 2 begins with the rocking and rhythmic "Following Me." This number stands out by adding another layer of diversity amidst the density of this EP. The closing "Fetch" embodies a sense of calm, tethered to sound bites and backing vocals, pulling me into Yolanda's sound-scape. It feels new without losing site of the walls of sound that have come before it. I like it a lot.

Look for Yolanda online via streaming outlets. If you're in the market for some new wax, check out yolandaband.com and perhaps you'll score some vinyl. Thanks Yolanda, I look forward to your future output. What Vision is available now.

eightychoices.
Posted by 80choices at 8:55 AM No comments: