I am just a poor boy though my story's seldom told
I have squandered my resistance for a pocket full of mumbles
Such are promises, all lies and jest,
Still a man hears what he wants to hear
And disregards the rest, hmmm

In the clearing stands a boxer, and a fighter by his trade
And he carries the reminders of every glove that laid him down or cut him
'Til he cried out in his anger and his shame
I am leaving, I am leaving, but the fighter stills remains 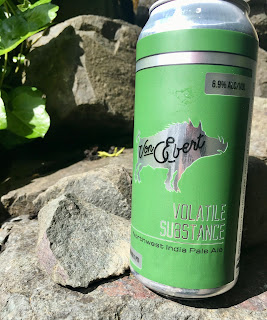 Another Portland brewery doing their best to maintain business during such otherworldly times is Von Ebert, makers of tasty beer. My Partner in crime swooped in for curbside pickup. Our order included fried chicken and potatoes, a bottle of Bouquet Blanc (review coming when I crack that rarity), and a four pack of Volatile Substance. It's nice to remember how lucky I am.

Volatile Substance is a NW IPA brewed with Mosaic and Simcoe hops (65 IBU | 6.9%). Prior to scoring these pint cans I'd only had it on draught. The can experience does not disappoint. As is our routine when the weather's nice Agent M and I took an extended neighborhood walk. We sipped a Volatile Substance while admiring the tree lined streets and beautiful homes.

Good bounce occurred when cracking open the pint. Notes of pineapple and grapefruit hit early and disappear from there. This IPA has some bite to it. Agent M noted that it was bitter and tingly, not for beginners. She also mentioned piney characteristics, hoppy and strong. I couldn't be more proud and stoked to take walks with someone.

Be safe during this time of physical distancing and try to support local businesses whenever possible. Keep on keeping on. Enjoy independent beer responsibly. 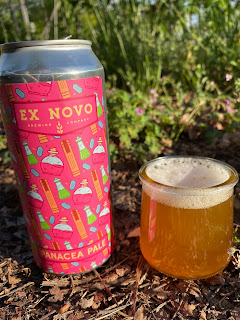 Ex Novo has us Jones'n for fresh cans. My partner in crime and I have been stoked on the heady releases we're able to still enjoy while physically distancing. Hitting up Ex Novo for Detroit-style pizza and some oat sodas is rewarding. We're all about the delicious Panacea Pale Ale (6%). Recently we enjoyed a cold pint and recorded our tasting notes at the community garden as we strolled with the sun as our guide.

A bubbly carnival with light fruity indulgence kicked off Agent M's senses. She noted how drinkable it was without being too hoppy. "Delicious" and "new spring favorite," high praise from a formidable beer fan.

Whiffs of apricot and subtle malt hit my nose first. Good foam rises to the top creating lasting legs drink after drink. A slipperiness mingles with the effervescent body. Slight bitterness registers late in tasting, however it's absent in the aroma. Panacea Pale Ale goes beyond taste, it involves all of your senses.

This single hop pale ale is brewed with HBC 692, an experimental hop that the brewer calls, "pretty awesome." I'd have to agree, this beer is too legit to quit. Ex Novo will deliver craft beer to your door if you live in Portland, how cool is that? We could all use some good libations. Support local brewers during these difficult times if possible. Helping independent businesses is more important than ever. Enjoy craft beer respectfully.

Feelings of being unsure and worrying about unknowns is becoming all too common, it's hard with so many cultural norms having shifted. Uncertainty is bubbling up everywhere — public health and health care systems are shattering, financial markets nearing collapse and federal government appearing useless — there's so much heavy in the world right now. I need to remember to take a breath, to not be in a hurry.

Maybe this write-up can act as a brief escape from the news, statistics and daily press briefings. Creativity, reading, good music, puzzles, long walks, nature, delicious food, loving your loved ones, and preparing for whatever comes next will help us to focus on what truly matters. Because as O-Ren Ishii so boldly stated, "now's the fxcking time!"

Sports may not be the answer but it can be an elixir, even if we're all watching from home. I miss my favorite soap opera. Will basketball exist in 2020? Plenty of rumors swirl about the NBA returning. I hope there's a way to safely bring games back to life. Below are my thoughts on regular season awards and such. Thanks for checking in. Be safe and do your best. 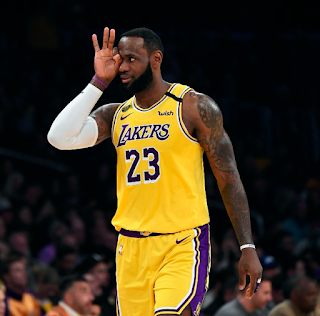 
The NBA stipulates that each team be comprised of two forwards, a center, and two guards. Thus my selections may not reflect the 15 "best" guys, but it does reward deserving players while assuaging the positional hooey. Prerequisites aside I favored winning over stats. For instance, a case could be made for Bradley Beal on third team with his robust numbers. I chose leadership and winning by selecting Kyle Lowry for the last guard spot. Lowry's numbers are solid on a Raptor's team with the third most wins. Another close call was whether or not to select Jimmy Butler (20.2pts 6.6rbs 6.1ast). I went with Jayson Tatum (23.6pts 7.1rbs 2.9ast). Tatum played in five more games than Butler plus the Celtics were ahead of the Heat in the standings. Gobert could easily be one of the centers; I rewarded Bam and Sabonis, assuming I can slot Sabonis in at center. I also think it's refreshing to see new names on this list.


This category was tough. My initial notes had eight viable choices. The five above plus Carlisle, Snyder and Stevens. Honestly a case could be made for any of these tacticians. I believe my top two coaches did the most with their rosters, especially when factoring in outside expectations versus on-court results. There was some masterful coaching this year and the talent of those calling the shots goes deeper than my list.


Ja Morant as Rookie of the Year was the easiest award to give out. Memphis had the eighth spot out west. Morant draws most of the opposition's attention and Memphis relies on him to produce. I enjoy watching him attack, he's fearless. As amazing as he is athletically he also dissects defenses with his IQ. Ja's ability to make the right reads allows him to hunt opportunities and facilitate simultaneously. Speaking of playoffs, I put Nunn ahead of Zion because he started in 62 games for a Heat team that would have had home court in the first round.


Schroder played in 63 games this year but started only once. He was on the closing unit that was clutch as hell. The Thunder had five winning basketball players and three of them were point guards. Their crunch-time lineup was winning games, OKC held the five seed. Schroder's numbers are equally impressive to that of the two Clippers and the Thunder have a lot less to work with. Hell, the Clipper's bench could probably grab a playoff spot in the east. This award goes to Dennis Schroder among a deserving list of elite reserves.

Any one of the top four could win this award. I lean toward Bam and Ingram mostly due to the dramatic leap they took. Not to say that Luka didn't grow by leaps and bounds, he's an MVP threat. Siakam continues to grow his game year after year. How many times can a player win this award? Bam gets most improved in my book. Who had him on an all-NBA team at the start of the year? Adebayo took charge of his own destiny and in doing so he may have become Draymond 2.0. Should anyone doubt Bam's motor, defensive versatility, or play making skills, he'll be the first to shut that shit down. He's a glimpse into the future of the five. 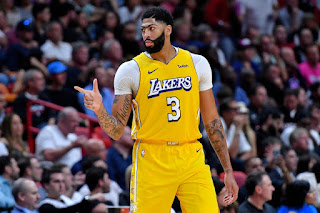 
Davis was the best defender I watched this season. He's a defensive cheat code who excels at erasing mishaps on that side of the ball. Not only is he athletically gifted with size, speed and strength, his instincts are uncanny as well. The economy of motion with which he wreaks havoc is unprecedented at his position. Steals, blocks, rebounds, clamping fools straight up, deterring shots, or being a help defender, the Brow is as good as anyone on the gritty side of the floor. Somehow Davis makes it look pretty.

MVP
In my mind there were eight worthy candidates for MVP


You may have noticed these players have the eight highest PER's (a cool coincidence realized after compiling stats). Harden led the NBA in *scoring, LeBron in *assists. I can safely say that these were/are the eight best players this year. Opinions will vary. Valuable became the key word in trimming my list down to five. The five players on my MVP ballot: LeBron, Giannis, Luka, Jokic, Dame.

There's an obvious and valid WTF no Harden argument to be made. His numbers continue to be video game-like. But is his team still his team? Kawhi's omission is due to two factors. First, he played in too few games (51). And second, the Clippers have perhaps the deepest roster and are really good even without him. Leaving Davis off was also difficult. AD leads the Lakers in every major statistical category except assists and is their leader on defense. LeBron's the engine that makes LA go — maybe they poach votes from each other — I went with LeBron.

Luka's the most unassailable choice other than the top two guys on everyone's list. His numbers are insane as the linchpin of the most potent offense (28.7pts 9.3rbs 8.7ast 27.75 PER). At 21 he's already proven himself to be a gift from the basketball gods. Face it Luka's an assassin, there's no telling how deadly Lone-star will become.

Jokic and the Nuggets had the third best record in the west. Who else takes Denver to these heights, the list would be small? Their roster is nice but it doesn't wow. The Nuggets without Jokic don't make the playoffs, period. That counts for something in my book.

Dame was on fire, as in, he was a human flamethrower unable to be extinguished by opponents. Lillard is probably the single most valuable guy to his team. The Blazers were mired by injuries all season and yet he kept them afloat and only three games out in the win column from the eighth seed. I relish watching Dame unload 35 footers in the face of his defender. He's a leader on and off the court, a good example for youngsters and adults. I was hoping he'd will this team into the playoffs. The Blazers could be mean next year when fully healthy. 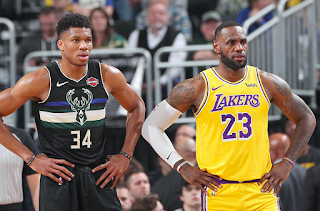 Let's be real, the battle for MVP is a two man race. Giannis and LeBron are the only options. Giannis  is a deserving recipient, he had the best numbers on the winningest team.

How many less wins would Milwaukee have if they played in the west? A few things would happen; Milwaukee's point differential would go down, as would their winning percentage, and Giannis would play more minutes to account for a tougher schedule. His numbers could potentially go up in that scenario. It's perfectly fine if Antetokounmpo wins his second straight MVP.

How many more wins would the Lakers have in the east? LeBron's already doing what Giannis is trying to grow into. James controls entire games facilitating offense with maestro-like precision. The Lakers suffer far more when James is on the bench than when Giannis sits for the Bucks. LeBron had the Lakers in prime position to advance through the west. Maybe they'll meet in The Finals. Or maybe not. We might already have all that the NBA is capable of giving us this year. Crown the king. LeBron deserves MVP.