Derived from the Spanish word for mountain, The Big Sky state is a paradise for snow seeking adventurers. The Faction Collective recently launched their second season of videos in Montana. Cinematographer Etienne Mérel captures Adam Delorme, Tim McChesney and Duncan Adams as they slay some uncharted terrain. Enjoy winter while you can.


eightychoices.
Posted by 80choices at 9:53 AM No comments:

Birthday of the Mighty 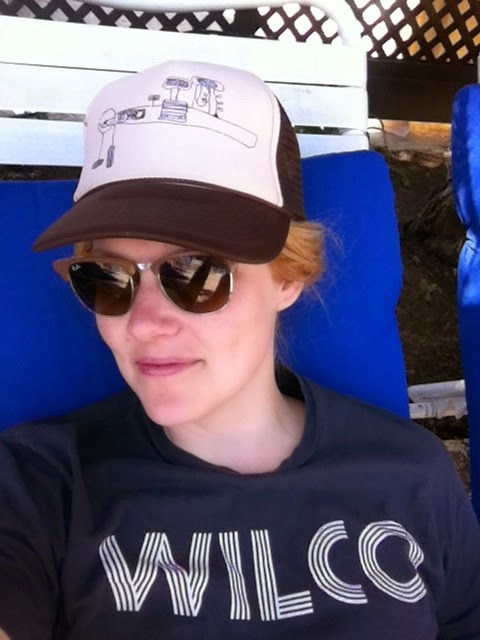 Gypsy gal, the hands of Harlem
Cannot hold you to its heat
Your temperature is too hot for taming
Your flaming feet are burnin' up the street
I am homeless, come and take me
To the reach of you rattlin' drum

HAPPY BIRTHDAY! You're the best. You're my home. I Love You Mighty. To the peach pit.

The Faction Collective are pushing the boundaries of free skiing, both in the back country and in urban settings. Not only are the riders next level, the film crew is dope too. This makes me wish Tahoe had snow. It's always a good idea to take a trip to the high country. Let it snow, let it snow, let it snow.

eightychoices.
Posted by 80choices at 11:09 AM No comments:

No Cities to Love

Sleater-Kinney should be measured in power, akin to the horsepower of a car—they know how to go. Their latest record, No Cities to Love, basically destroys the music scene right now and says, what 10 year break? They begin with a peddle-to-the-metal number named, "Price Tag." Next comes "Fangless," a song with a catchy beat and snappy drum section— it's Tucker's familiar vocals that drive it however. The next track, "Surface Envy," unleashes itself onto the listener, not asking for permission. The chorus of, 'We win, we lose, only together do we break the rules,' feels like an order being given. "No Anthems" is a reverb drenched thunderhead, a precursor to the storm ahead. It has a creepy under current, in a good way. The final track, "Fade," asks lyrical questions that are real. The inquiries lead me to wanting more, regardless of the void they just filled. Sleater-Kinney has a relentless approach, it reminds us just how good they are. Rock and roll was made for artists like them. If you're interested in checking out their upcoming tour click here. No Cities to Love is available now.

eightychoices.
Posted by 80choices at 2:14 PM No comments:

The Veteran's Memorial Ballroom in Sonoma looks like the home of a high school prom, charmingly old-school. I absolutely loved it. Intimacy was obvious as Father John sang to each of us this past Saturday. His mess of hair and beard have been trimmed, his passion for delivering musical novellas has not. Backed by six highly capable musicians, most of whom are multi-instrumentalists, they vibrantly brought to life the material off of I love You, Honeybear and Fear Fun.

Honeybear got things going with its warm sound, washing over the observant crowd were two twelve-string guitars. A fitting form for this song to take. A couple of tracks later they dove into "True Affection," a modern pop number that has a danceable snap to it. This synth-based hum was assisted by the use of four keyboardists. Following the glitz of true affection came one of my favorite numbers of the night, "When You're Smiling and Astride Me." This song has the power of a gospel hymn or R&B hit. His vocals were striking, making my weekend escape complete.

Few artists can deliver such a range of emotions, as well as genre shifting sound, like Father John and his musical holy-men achieved during the course of the show. They were fearless. New ensembles tend to play it safe, but not these seven men. When the twang of the fiddle situated itself in between the cries of a pedal steel guitar, "Nothing Good Ever Happens at the Goddamn Thirsty Crow," became a hybrid of Workingman's Dead and the score to a Taratino film. "Ideal Husband," had a seasoned rock and roll sound, pushing into an edgier direction. Fifteen songs in came the single, "Bored in the USA." The audience was well aware of this track, perhaps they'd been fawning for it.

It was the next three tracks however, that pushed at the boundaries of whatever it was they were creating. The pedal steel came back for a great, "Funtimes in Babylon." I wrote a note at this point in the show, it read, The New Wilco. With all seven talents coalescing, they carved out their own inventiveness, framing the poetry of Tillman's words. "Now I'm Learning to Love the War," was an artistic arousal, one that will be nurtured and reshaped during this tour. When I heard him pronounce, 'fifteen year-olds, made from dinosaur bones,' I was thankful to be a part of the moment. Those words reminded me that time is short. The Finishing touches were put to us all during, "Holy Shit"—my other favorite of the night. The deep intensity of the song was amplified by the momentum of the band. They were more than able to build on the feelings of the lyrics.

The encore began with a Leonard Cohen cover and segued into a honkey tonk inspired "Tee-Pees 1-12." Father John had told the audience earlier that, "Everyman Needs a Companion," would show itself in the end. He was right, it closed the night. Misty's a performer who actually has something to say. His vocals are able to sooth as only a good voice can, emitting strength when needed. I left not needing more, yet I was still hungry. I was buzzing in satisfaction. 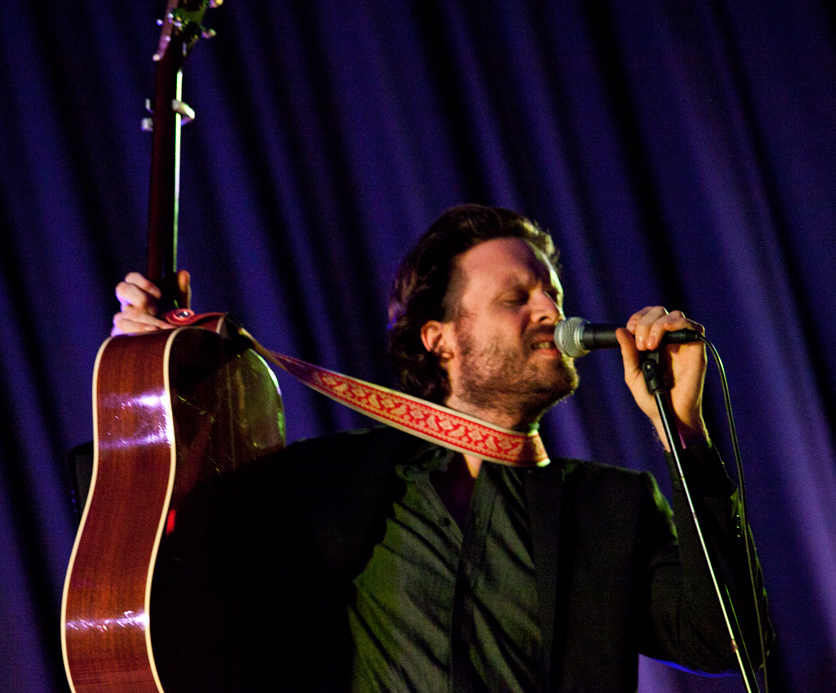 Set list: 1. I Love You Honeybear 2. Strange Encounter 3. Only Son of the Ladiesman 4. True Affection 5. When You're Smiling and Astride Me 6. The Night Josh Tillman came to our Apartment 7. I'm Writing a Novel 8. Nothing Good Ever Happens at the Goddamn Thirsty Crow 9. Misty's Nightmares 1&2 10. Chateau Lobby 11. Nancy From Now On 12. Hollywood Forever Cemetery Sing 13. Sally Hatchet 14 . Ideal Husband 15. Bored in the USA 16. Funtimes in Babylon 17. Now I'm Learning to Love the War 18. Holy Shit Encore: 19. I'm Your Man (Cohen cover) 20. Tee-Pees 21. Everyman Needs a Companion


eightychoices.
Posted by 80choices at 2:10 PM No comments: 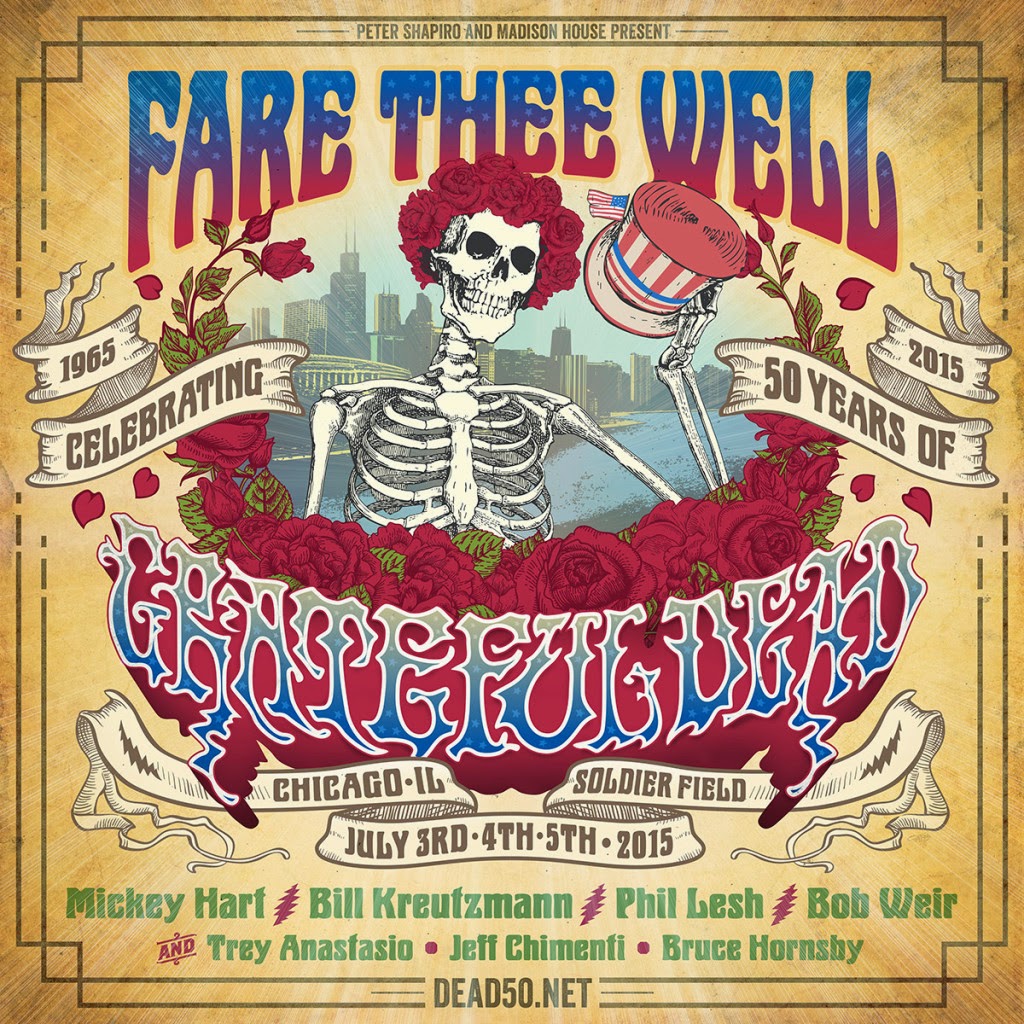 The Grateful Dead will descend upon the Windy City, for what is billed to be their final performance together. Soldier field will host this epic reunion, almost 20 years to the day since their final performance at this same iconic venue. Jeff Chimenti, Bruce Hornsby, and Trey Anastasio will join the remaining original members over the July Fourth weekend. Needless to say, this will be a hot ticket. Thanks to TRI studios for sending out the notification.

Chimenti is an obvious selection, he has a strong handle of their catalog and is an absolute shredder who's honed his skills within that musical landscape. Bruce will play piano and most likely assist with vocals. There are other guitarists I would have rather seen fill the role given to Anastasio, what can you do?

The core four are the ultimate draw here. It's nice to know that the hatchets are buried, or at least set aside, in honor of a half-century worth of influence. And for Jerry too. Get ready Dead Heads!

For more information on the "Fare Thee Well" tour, celebrating 50 years of the Grateful Dead, click on this link...dead50.net.

eightychoices.
Posted by 80choices at 1:04 PM No comments:

I Love You, Honeybear

In less than a month (February 10th) we can all grab a copy of Father John Misty's sophomore effort, I Love You, Honeybear. The opening track is the title to the album and claws at the listener with unabashed honesty. He begins by telling us his story. Near the half-way point, comes the first rhythmic persuasion that pushes into my attention, a gospel hymn cloaking the pop ballad beneath—'When You're Smiling and Astride Me.' The more noticed number, 'Bored in the USA,' is perhaps a commentary on his state of mind, and more importantly, the state of our union. Just before the closing is 'Holy Sh*t.' This song whirls in contemporary lyricism, and the metaphors for love are given new forms—both generic for consumption and personal to emit feeling.

This Saturday (1/17) you can catch Father John at the Veteran's Memorial Ballroom in Sonoma, assuming you grabbed tickets to this sold out event. Enjoy the show and the song below.


eightychoices.
Posted by 80choices at 1:42 PM No comments:

Year of the Goat

When our calendars turned to 2015, we entered into the year of the goat. With that sentiment in mind, here is a heart-warming video of an English pygmy goat named Benjamin. He appears to be quite the little man—full of energy and bucking around. Cheers to all the kind people who realize that animals are well worth our extra time and care. After all, creatures don't cause problems, humans do. Enjoy.

eightychoices.
Posted by 80choices at 9:32 AM No comments:

Labels: 2015, benjamin the pygmy goat, eightychoices, year of the goat

Bored in the USA...croons Father John Misty on his latest track, off the yet to be released I Love You Honeybear. He plays with his listeners and I like it. Fear Fun was his last album—it told stories, held my attention and portrayed thematic undercurrents wistfully well. Both his eyes and his ears seem to be open, perhaps his heart too. This modern minstrel takes aim at the land of milk and honey with four shows. See you at the sold out Veterans Hall Ballroom in Sonoma on January 17th. I have really high hopes for this show. No pressure though.

eightychoices.
Posted by 80choices at 12:05 AM No comments:

Jayhawks at The Fillmore

The Jayhawks broke through during the heydays of the 1980's music scene in Minneapolis. There was a rich pool of talent during that era—The Replacements, Soul Asylum, Husker Du, and of course Prince. As they helped create the Alt-country sound, they were also penning great songs at an alarming rate. Their early albums were released on Twin/Tone Records in 1985 and 1989. A move to Def America Records in the 90's proved fruitful. Hollywood Town Hall (1992) and Tomorrow the Green Grass (1995) are probably their best known efforts. This transition also brought new members Karen Grotberg (keys) and Tim O'Reagan (drums) into the mix. Founding member, Mark Olson would eventually leave the group. With his departure, original member and co-writer, Gary Louris took over the songwriting duties, evoking a edgier, modern tone. Kraig Johnson joined the band at this time, creating a five piece ensemble. In 1997, Sound of Lies was released as they steered into new directions that would be further explored on Smile (2000).

The Jayhawks will be embarking on a west coast tour starting tomorrow in Seattle. The lineup will look a lot like it did in 1997, including original bassist Marc Perlman. They make a Bay area appearance at The Fillmore on January 8th.  It is rumored that Louris, Perlman, O'Reagan, Grotberg and Johnson will be playing material from Sound of Lies, Smile and Rainy Day Music—each record will be reissued this year. Maybe you'll catch their show, in the mean time, enjoy the track below.

eightychoices.
Posted by 80choices at 12:44 PM No comments: