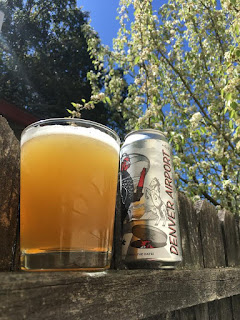 Hen House is a top choice for me when I see it at my local grocery stores. Today they released Denver Airport, a new IPA that will hopefully become a regular within their rotation. The story behind this IPA is almost as good as the beer itself—just look up the conspiracies theories that are linked to the Denver airport. Hen House used Citra, Hallertau Blanc and Ekuanot hops to create a very palatable IPA with the right amount of bitterness. It also helps that the ABV is 6.3%, however, your four pack may disappear quickly too.

When opening the can the first scent I thought of was pineapple. Denver Airport pours thick, like a hop milk shake, but it is not entirely opaque. A lasting and substantial head protects the top of the ale. The scent was a bit muted once in the glass. Bitterness hits initially, before transitioning into a smooth finish. If you happen to see this latest release from Hen House I suggest grabbing some.

eightychoices.
Posted by 80choices at 4:01 PM No comments:


Hey Mama, it's me
Said you better wait child
Said you've been a long time running
Hey Mama, answer me
Baby boy you better sit down
Can't listen when the sun's out
My only son this will be hard to hear

eightychoices.
Posted by 80choices at 5:40 PM No comments:


Their sound is uniquely fresh, like nothing else being made. Superorganism blends multiple genres into one modern sound-scape. They seem to both blur and eradicate the constructed labels of music (psyche, pop, hip hop, recorded sounds, dreaminess, and whatever else you want to call it). Just give it a chance and enjoy their mix of creativity.

eightychoices.
Posted by 80choices at 10:25 AM No comments:

I'm not a prop for you to use
When you're lonely or confused
I want a love that lets me breathe
...

eightychoices.
Posted by 80choices at 8:44 AM No comments:

eightychoices.
Posted by 80choices at 3:08 PM No comments:

Hen House, one of Sonoma County's best breweries, has yet again crafted a very tasty beer. Hollow Moon is another of their outstanding IPA's. Not only do they brew top-notch pale ales, IPA's and Saisons, their branding is just awesome. Much of the art adorning their four packs are some of the best in the business. Hollow Moon and Frozen Envelope are two of my favorites in flavor and artistically.

Hollow Moon weighs in at 6.7% and is brewed with Sorachi Ace and Mosaic hops. The nose is both fruity and hop forward. The blending of those characteristics is done flawlessly, neither is dominant, they work in cooperation. There is a particular fruit nuance I can't quite place, pear perhaps? The lushness of the fruit is matched perfectly by the hop profile that prevails without being too resinous or piny. Pouring a cloudy, hay-yellow, the top is adorned by a nice foam. Mango and toasted coconut are tasting notes that the brewer gives in its description. I can get behind the mango nuance, I didn't taste the toasted coconut however. Look for Hen House at local North Bay grocers.

Enjoy responsibly,
eightychoices.
Posted by 80choices at 11:01 AM No comments:

Each year I kind of forget, and then, I'll re-remember or be reminded that Record Store Day has revealed their annual list. This year I'll again be in Charleston. Most of my adult life I've perused the collection at The Last Record Store, or a couple of years at Harvest Records. Hopefully the little shop my wife and friends led me to last year will have a selection or two I'm looking to score. Here's a link to the Record Store Day list and below is a quick-hitting rundown of the artists piquing my interest on the list. Long gone are the days of no lines and only die-hards, happy hunting.

eightychoices.
Posted by 80choices at 12:03 PM No comments:

And all the so called civilized peoples
Have increasingly become crazy and self-destructive
We confuse science, words, numbers, and ideas with the real world
Most of us would rather have money than tangible wealth
And a great occasion is somehow spoiled for us unless photographed
And to read about it the next day in the newspaper
Is oddly, more fun to us than the original event

eightychoices.
Posted by 80choices at 12:02 PM No comments:

Khrysis & Elzhi are Jericho Jackson | "Self Made"

... y'all don't play fair and square
All I push is mind power, screw zombies
They brainwashed while my brainwaves is tsunamis
The small beaches on a island with a few palm trees
Is bars for you gun toters who pursue crime sprees

Self made since twelfth grade, this my calling...

eightychoices.
Posted by 80choices at 8:10 PM No comments:

Four pints for take out, check. I scored Round Towe, a delicious double dry-hopped, New England style, double IPA—I know, it's a mouthful. This amped up IPA (9%) is one of the more recent offerings from Mikkeller's Hop Series. Gotta love Mikkeller Bar SF.

Pouring Round Tower creates an almost oat-like cloudiness, yet it's ultimately transparent. A nice head floats above, lingering still after a moment. Easily spottable is the sediment and carbonation, both move about in the glass. The nose is skunky and the first taste is juicy. It's smooth, but its gravity does hit the slightest hot. A good finish helps ease any worries. I wish I had more.

If you happen to get your hands on a Mikkeller 4-pack, enjoy, you're lucky. I've been really stoked on their limited supply of rations. Anytime I'm at their bar, I always inquire early about the available beers they've canned. It's awesome to crack open one of their pints at home. I've got 99 problems, but good beer ain't one. Enjoy responsibly.

cheers,
eightychoices
Posted by 80choices at 2:15 PM No comments: