Thom Yorke and Massive Attack's Robert Del Naja, have released UK Gold for free. This modern-day dreamscape-like score, accompanies a documentary by the same name, which takes aim at clandestine corporate tax avoidance in the UK. Radiohead bandmate Jonny Greenwood contributes as well. "Mosquito Beat Slow" is immediately catchy—it ends quickly however, clocking in at a little more than a minute. The track "Mono Jam One V2" is a sludgier version of, "A Brain In A Bottle," from Tomorrow's Modern Boxes. String arrangements mingle with the produced hums and elongated tones during "Embers." Creepy, atmospheric sounds are morphed into physical evidence on, "Pin Loon Break Up." Bass pulses behind the industrial pop of "Battle Box," a song void of Yorke. In all, there are 12 tracks, vehicles for the films greater message. You can click over to Soundcloud or UK Uncut for streaming. Enjoy.

eightychoices.
Posted by 80choices at 11:16 AM No comments:

The first month and a half of 2015 has been rich in quality music. Below are some of the early releases that have found airtime in the confines of our cabin, and beyond. Maybe they'll make your playlist too. Enjoy.

"Bored In The USA"


eightychoices.
Posted by 80choices at 1:50 PM No comments: 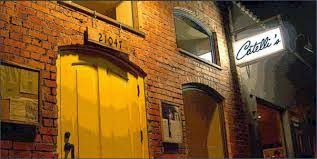 Catelli's restaurant in Geyserville creates some of the most fantastic food in all of Sonoma County. Their new American take on traditional Italian cuisine is beyond good, it's addicting. With a high-end wine list, of course, and a top-shelf bar, libations are paired with food that literally dissolves in your mouth. I'm talking about you, hand-made lasagna. The entire menu is impressive without being so over-the-top. Everything has it's own personality—loaves of garlic bread slathered in buttered and browned to a Parmesan perfection, Caesar salads tossed with basil in creamy dressing, and pasta that doesn't require teeth to be eaten. I'm beyond excited for my Valentine Day dinner date.

How fitting that the day created for couples falls on a Saturday this year. Even more of a reason to get out and celebrate being loved. If you're still deciding on what to do, consider Catelli's. You can always take a chance of getting a seat at the bar, it's first come first serve, the rest of the dining area is reservation based. Geyserville is a beautiful small town, nestled into the rolling wine county landscape, reminiscent of yesteryear. Happy Valentine's Day.

Russian River Brewing Company released Pliny the Younger on February 6th. Annually this limited monster gets tons of hype, rightfully so. Luckily I got a chance to sip on this tasty draught this past Tuesday—it's who you know. The scene on fourth street has turned into a bit of a circus over the past few years, so much so, that the line to get in wraps around the block. Or you have friends in high places and swoop in through the back.

This year's Younger was very fruity up front and in the nose. It still had that toughness in the mouth, engaged by the seven varietals of hops loaded into this triple IPA. The finish is amazingly smooth, considering the ABV is 10.25%. Leisurely paces are encouraged with this beast of a beer, a pint of water per pour doesn't hurt either. Slower is a term I attached to this 11th annual Younger batch. By that I mean, all of its traits unfold a bit slower, it's not so in your face. The River did an awesome job of creating a more balanced, brighter Pliny the Younger, without sacrificing the punch it has become known for. Those who get in are limited to three Youngers or three hours...

If you do make your way to the brewery, be sure to taste some of their other fine offerings. For starters, both the STS Pilsner and the Simcoe hopped Row 2 pale ale, are a must-have. I recommend knocking back a Parking Violation, an in-house IPA they had not brewed in some six years—it's one of my favorites. Russian River Brewing Company is truly at the forefront of inventive and award wining craft beers. They rightfully deserve every accolade, as their reputation continues to swell. Enjoy SF Beer Week responsibly.

eightychoices.
Posted by 80choices at 10:08 AM No comments:

One of the most inspiring journeys of life occurs this time of year along California's coast. Pacific Gray Whales migrate annually to Mexico, where they will give birth to their extraordinary calves. Bodega Head is a prime location to witness this natural wonder. This weekend is ideal in terms of spotting a whale as they move south to warmer water. Seeing these sentient beings in the wild is one of the coolest observations I have experienced. Get to the coast over the next few days and give yourself the chance to create a moment you won't soon forget. See you at Bodega Bay.

eightychoices.
Posted by 80choices at 12:05 PM No comments:

At a recent concert in Jack White's adopted home of Nashville, he invited some friends onto the Bridgestone Arena stage. Then they proceeded to annihilate. First out was his other band, the Raconteurs. This hybrid of old and new meshed well as they tore through songs from both Raconteurs albums. It should be noted that his newest ensemble also shreds—of course they do.


Van Lear Rose was released more than decade ago, whoa. Jack's fingerprints were all over that record. So when he welcomed Loretta Lynn out for a couple of numbers it seemed only fitting that they dive into "Portland Oregon." The pace was rocking, perhaps a bit out of the norm, in terms of tempo, for Lynn. White, the gentleman that he is, offered her some guidance when she repeated a verse. Regardless, this song is an all-time favorite of mine. Slow gin fizz, come on. Loretta remained on stage as Jack Coaxed her into singing, "Whispering Sea," a rarity from her earliest recordings. What a night in Nashville. Long live Third Man.