Brew Detective | From Astoria With Love 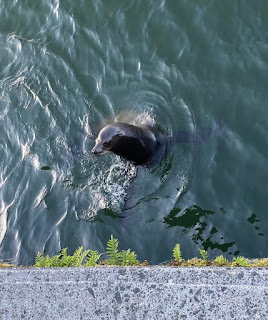 From Astoria with love, a place where happy can be had. No really, Astoria's awesome, don't tell anyone as the world gets hotter and dryer. Before tragic fires had engulfed the west coast in a haze of scorched earth, we booked a physically distant reservation outdoors in the sun with a shade structure.

Remember the sun? Clear Skies? Or just taking a big breath of fresh air? Our memories do, but I'm sure as shit longing for some outdoor time. Hopefully the heroic fire fighters can combat the destruction, and perhaps Mother Earth and Her climate we lend their aid. This time around I'm becoming more changed, almost too hyper aware. The west is ablaze and there's no going back. Perhaps for me as well. Below I'll reminisce about lighter times, different times.

Our late lunch was tasty. First up was mixed garden greens and veg, before moving on to wood fired pizza and another pint. We finished with a glorious slice of carrot cake, oh the cream cheese frosting. Way to go Fort George. Our early evening Pilsners along the river at Buoy were assisted by a friendly marine mammal. The frequent visits were so cool, as was the personality of this amazing sea lion. I'm super thankful for this day. Now to the beers...

Their new "45 Series" aims to spotlight local musicians, while also assisting local vinyl pressing plants. Awesome! Seriously. I was all in on this idea, not-to-mention doing the same beer twice, but different — Side A and the B side. Both offerings were brewed in 45BBl fermenters. As unfiltered Germanic Pilsners go, this was boss. Brewed in collaboration with Von Ebert Brewing and Jealous Butcher Records in Portland, the Jealous Butcher Pilsner was not playing around. Of course I scored a four pack and a 45.

The B side is a different version of the aforementioned Side A. This Jealous Butcher was dry hopped with Simcoe and Citra hops. The added spice was nice, real nice, but I'm gonna keep dropping the needle on Side A. By the way, Califone playing "Crazy as a Loon" is also boss. Who doesn't like John Prine songs? Side A wins on both accounts.

I wanted Song Bird on draft rather than out of the bottle. This sour blonde is brewed in collaboration with Alesong Brewing. Agent M's initial reaction, "real tart." This mixed culture blonde was conditioned on a thousand pounds of peaches and aged in wine barrels for 7 months. Timely to say the least. I was glad I was able to enjoy it fresh from the source.

Sunrise - OPA - 5.2%
Some seriously herbaceous vibes were emanating from this pale ale. The bitterness, which was almost resinous, sacrificed some of the traditional smoothness other pale ales possess. Sunrise OPA is based on the first beer ever brewed at Fort George, pretty cool.

A classic take on a standard, Buoy's Czech-style Pilsner never disappoints, especially in person along the Columbia. Saaz hops bring this beer to life. Clarity is unmistakeable, so too is the beauty of the surrounding nature. It's best to enjoy beer while allowing oneself to soak it in, to not be in a hurry. Thanks for checking in. I hope everyone's being safe, sensible and kind. Do the right thing. 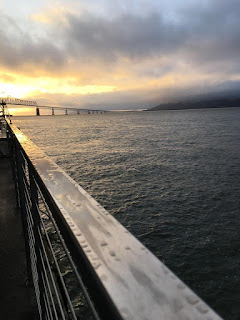 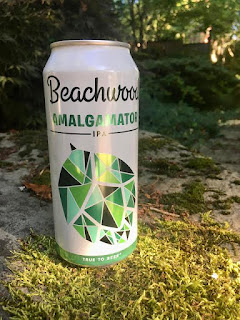 The name may be a mouthful but the proof is in there. Beechwood's Amalgamator is an IPA for those of us who want transparency in body. The blending of ingredients inside of this ale, is an artistic path to the notes we smell and taste. Doughy foam sits noticeably atop the ale. Carbonation is initially hidden, but apparent in mouth feel. Earthy garden vibes are at the forefront of tasting, reminiscent of leafy greens. Amalgamator IPA is light enough to crush and refreshing, a great summer beer. I recommend picking some up if given the opportunity. Enjoy craft beer responsibly.

Note:
This post was written before the disastrous fires were raging along the west coast. As a Pacific resident my heart aches. I'm saddened and nervous. Thoughts and blessings to all who are dealing with these catastrophic events. Human induced climate change has to be taken seriously. So too does our collective interaction with Mother Earth and our treatment of the natural world. She doesn't need us, but we sure as shit need Her. A global pandemic, social and civil unrest (everywhere, but especially in Portland), and the most destructive fires perhaps of all time, are an almost fictional narrative of an impending apocalypse. This 2020 layer cake of stress is very real and it has me thinking about a lot of things. Be KIND and Stay Safe!

Bob Marley and The Wailers | Catch A Fire | "No More Trouble" |