outside lands in golden gate this year was pretty rad. having attended a late night show on saturday & then making it to the park sunday, i must say the bands we caught were super. the food was amazing, mad props to andalu for their crispy mac & cheese paired with corn on the cob & farmer brown's chicken n' waffles! mmmm it was tasty. the beers were over priced, most art was cool, we bought a limited and signed "night" poster & most everyone seemed in high spirits. now let's cut to the chase...

sound tribe sector 9 at the independent... 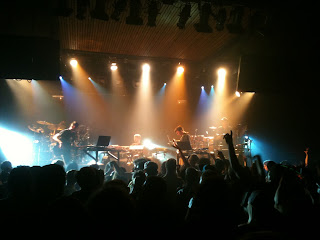 for those of you who are not yet listening to STS9, this is a good time in their history to give it a try. they have a unique sound & mode of operation that is all their own. i really dig 'em. STS9 threw down hard at the independent for the late night series that accompanies outside lands. these great concerts showcase not only the band, but the city, on such an intimate level. i've come to believe that hot late night shows are what's really going on if you're an audiophile like me. sector hadn't been in the bay area since their show at the fox in oakland (02.13.1o). i was so primed to see them. we had a good crew going. which was stellar considering these were some of the toughest tickets to get all weekend. up to this point they have 2 sold out shows on their tour, this one & halloween in athens, ga.
they went off for a sf crowd that had obviously been hankering for their return to the city. opening with this, us was nice way to set the tone. but personally for me, it got filthy 4 tracks in with instantly! followed up by a hyper golden gate, which is a new track off of when the dust settles. then came a track i'd been pining for, ramone & emiglio. it was straight ridiculous. it had the old school sound to it & was played with a blistering intensity. it was a sure high light. that three song bender was the fire of set number 1.
the 2nd set got going quick with another new cut, scheme. it was danceable & fun. it's definitely more of an acquired taste if you prefer their older compositions. i for one dig the hell out of their newer style & direction. i feel as though envelope pushing artists create the art that they need to. then came, really what?, which was club bangin'. next was evasive maneuvers, which flowed directly into a fierce monkey music. after that it was onto a mean kamuy. the only off segment of the night followed during be nice. perhaps having to do with a portion of the song not created via live instrumentation. a small pot hole in an otherwise stellar musical journey. having left the stage for only a couple of minutes, they encored with a feverish somesing. i know one of my buddies was hoping for that hit all night. overall it was a face melter & a show that ran over 2 & 1/2 hours. for the complete set list click here. 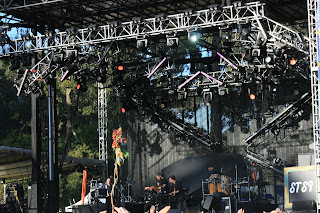 ...another day, another sector set!
we entered the festival while !!! was playing. they sounded great & played a sweet prince cover. after their set it was major laser. they were pleasing the masses & got more than enough people to take off their shirts so they could be "spun like helicopters." but the real reason i wanted to hole up at the twin peaks stage was for STS9's festival set. they didn't disappoint.
anytime sector opens with a track like, the unquestionable supremacy of nature, you know it's going to be hyphy! talk about a dance blaster. due to the short set times created by the festival brain trust (or lack there of) too many great artists were given only an hour or less to shred. even though their set consisted of 7 songs, STS9 set out to conquer. they obliterated the dance happy crowd with bangers like, ABCees, economic hit man (w/out the clermont lounge remix, a place of lore in the atl) & to close it down, rent. for the complete set list click here. thank you sector for bringing your heat back back to cali cali. 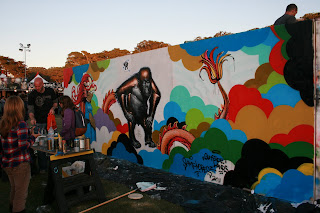 ...between the two main stages there was a wealth of oddities & activities to stimulate the senses. one of the coolest for me was the juxtapoz magazine sponsored live paintings. there were 3 walls, forming a triangle, that had been tagged by artists at large. 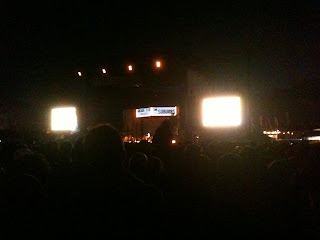 ...right now, in modern music, there may be no one more potent than Arcade Fire. i was thrilled at the chance to soak them in. especially amidst the height of their deserved world celebrity. having seen them once before at austin city limits, prior to their fame, i both knew & didn't know what they were capable of. their brilliance is two part; their intensity on stage & the command of their songs. for what it's worth, they played perhaps the best show so far this year. pretty amazing being that it was a mega fest set & that i was at least 100 yards from the stage. none of their craft was lost in translation. both my wife & i barely uttered a word. their 17 song set list was absurd. they couldn't have picked better tracks from their catalog. plus the way the songs were arranged & unfolded, lead me to believe that this band will continue to leave its impression on modern music for years to come. the stage was made to look like an old movie marquee. it was spot on & very nostalgic. there was a drenching feeling coming from their stage prowess & enthusiasm. it was as if they were giving all of them selves to the audience. however daunting it may be, i'll try to spot light some of my favorite moments of the set.
rococo was simply stunning. delivered with subtle differences from the recorded version, it grew into a rock & roll song projecting sonic force. neighborhoods #1 (tunnels), is a personal favorite of mine & crept into me like a good story. the words are so familiar, almost reminiscent of north american youth. neighborhood #3 (power out) thundered with potency & gave way to the encore. if there was ever an encore that had built its way to a crescendo, this was it. everyone wanted the same thing: wake up. we all got it! there was a point early on in which the crowd was the voice. tens of thousands of fans all tied into a moment. unity. i didn't think they could top that & maybe they didn't, but boy did they keep going. sprawl 2 (mountains beyond mountains) was awe inspiring to say the least. all facets of their performance were clicking. i haven't been able to get that song out of my head yet, thank god! my wife & i joked that we would have paid the single day price just to hear those two songs, it was that good. arcade fire is a don't miss. for a complete set list click here. wow! 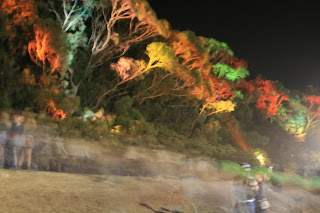 ... as the experiences of the day lingered, i couldn't help but think we had chosen the day to attend. the city was full of life & the beauty of golden gate park gave us the perfect setting to wander away from. when the masses hit the streets, there was no more street. those of us on foot had taken over the pan handle, the park's perimeter & mass transit. oh how i love san francisco. enjoy live music & art.

eightychoices.
Posted by 80choices at 1:45 PM