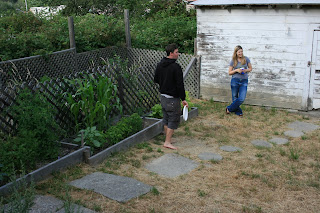 in a far off place, not too long ago...
actually, on july 23rd & 24th, we all got down to celebrate the good Dr. he's one of my favorite people on earth. to make a long story short, he moved to the beautiful state of utah, after an epic run in san francisco. i love ya bro & i'm sure as hell gonna miss ya.

with a keg a of summer solstice from anderson valley, 5 growlers of pliny the elder, whiskey, countless bottles of other heady beer and enough champagne to satiate our crew on sunday morning, the pole banging tournament of the year was primed to become a thing of legend. pole banging is a hybrid of ultimate frisbee, horse shoes and in the west coast version, baseball. there are some rules of course, but the most important one is that you must always have a beverage in hand. after that, no goal tending, no zingers, first one to 9, win by two, bottom half of the round gets their last chance. for this farewell event, teams were drawn from a hat, except for the Dr. who was allowed to choose his team mate, my wife (she's the good's)! 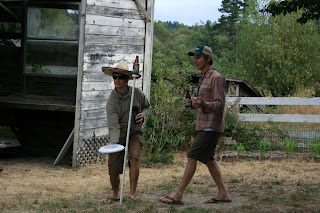 with enough food to feed two armies and two grills cooking up delicious skewers & bratwursts, it was time for the PBA (pole bangin' association) arena to take center stage. pole bangin' is a great spectator sport. we had enough teams to do a condensed march madness style bracket. however, we did make it double elimination, so that there was a way to make it back to the finals despite an early loss. 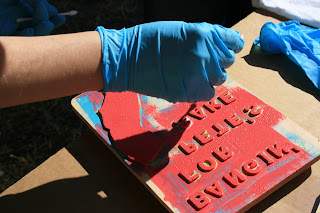 as the games began M & I had prepped some wood block printing for all those in attendance.

it was super cool. everyone brought an old tee-shirt or hooded sweatshirt to print on. some even brought new blank tee's. there was also going to be a secret surprise for the two winners, a CHAMPS tee. the Dr. got a limited edition set of towels for his new digs. it was so sweet to see everyone stoked out on art inspired by the event. i'm so lucky to have such amazing friends! we really do shred hard. thanks to everyone who made it. it was a magical party in which all of our energy & effort was so positive & fun. you guys & gals are the best. thanks to our neighbors as well, they had to tolerate us.

as the night move into darkness, the games heated up, so too did the bon fire and outdoor lighting. what a celebration... 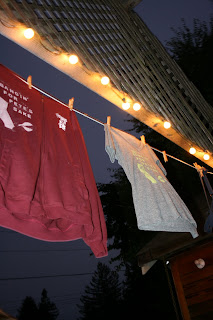 a good number of us were wearing sombreros and executing gluttony in the most northern california of ways, which was nice. at the end of the tourny, it was eightychoices & felton who brought home the title of "bangin' for pete's sake" champs! if you want to know the truth, no one lost, we were all winners this weekend. when the matches ended the dance party ensued. it truly was a throw down. a few friends even mentioned how, up to that point, they thought it was the dance party of summer. you should have seen some of the moves! the music mixes went late into the morning, well past 4:00 (eek). it was a great night for an awesome guy. 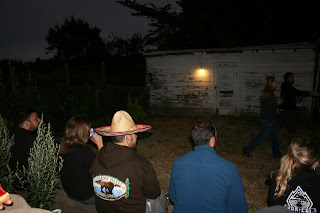 ...recovery the next morning included home made beignets, mimosas and honey drizzled grilled bacon. breakfast of champions i imagine. later in the afternoon, when the last hooligans were about to head south, it was time to say goodbye. it was heart felt and emotional. people who are important to you, get a lot of the real you. i was sad to see him off, but we both know the journey isn't complete. i'd do anything for the good Dr. if you happen to know who i'm speaking of, ask him what one of his favorite compliments is. it's out there, too out there perhaps & i'm the one who paid him it. he's a best friend & friends like that equal family. we may not live as close, but you can bet your ass we'll be visiting each other & meeting up to shred. i love you bro.