Bigger is not better. Recent articles by the New York Times have shone light on the inspirational power of living smaller. A concept that is by no means new is finding a rebirth of sorts for those who are willing and able to downsize and thus, eliminate distractions. Our running joke for years has been, clean living. Whether you own or are renting there are many paths to take when choosing where to live and how. These major decisions tend to dictate lifestyle. I for one truly believe that our time and daily interactions are worth far more than a paycheck. Sensations that mean something are powerful. Finding gratification in doing things you love or by spending real time with loved ones are invaluable treasures of living. "Cabins, the New American Dream," is a cleverly written piece on how some of us can live. Here's to being brave by going small.

Glacier water must help to create crispness because each of my senses were piqued by a bursting crisp quality. A colorful blast of sun is the best way to translate this good-looking IPA. The aroma brought to mind memories of the first time trying new fruit. Icy Bay's great color and nostalgic aroma crawl out from under an airy layer of foam.

Apollo, Bravo, Cascade, Calypso and Summit hops create an elaborate arrangement with 2-Row and "specialty" malts. Reducing a six pack to zero is a legitimate concern—it paired well with our garden-grown, roasted vegetable chili. Try it with any dish that has a little kick. Icy Bay is an ample IPA rooted in the spirit of the journey. Alaskan Brewing Co. 6.2% | 65 IBUs

eightychoices.
Posted by 80choices at 12:43 PM No comments:

It's pert near time for the annual San Francisco free festival, better known as, Hardly Strictly Bluegrass. Thanks to Mr. Hellman and his ongoing philanthropic estate for spoiling the Bay area with a trove of music each October. In anticipation of the event I've been checking in on the individual artists' sites to get a better idea of which day to attend. For all of the comments out there that moan about the belated release of the schedule; a) it's free and b) do a little homework or click on the hyperlinks. Now that I'm done with that...

When Hardly Strictly was in its infancy I couldn't get enough, now I brave the masses for only one day. Choosing which day is dictated by the artists I'm most interested in seeing. More often than not Gillian Welch and David Rawlings are at the top of said list. Having seen them a bunch of times, I will probably pass on their Saturday offering. The other acts I'm intrigued by or have yet to see, play on Sunday. So I'll be making my way into Golden Gate Park for my own version of church.

Sunday it is. Hopefully there won't be too many conflicting set times. Here's a list of who I'm interested in (the first three are personal faves): Anderson East, Neko Case, Devotchka, Mandolin Orange, Charles Bradley, and The Blind Boys of Alabama. It's pretty amazing that six of the ten performers I had initially marked to see play on the same day. Hardly Strictly Bluegrass is well worth the effort and it's free. Enjoy the tracks below.


Devotchka | "The Winner Is"


eightychoices.
Posted by 80choices at 12:23 PM No comments:

New music always has potential, it's whether or not it's stimulating. Future Islands is capitalizing on that power as they posses the ability to command attention. Earlier this spring they released, "The Chase." This single put words around the questionable momentum of a relationship. There's still that  recognizable whirl of melodic redundancies that help to cool the senses—a helpful contrast to the theatrical delivery of the vocals. The B side, "Haunted By You," reaches at companionship or interaction, like feeling your way in the dark. The surroundings may be familiar, but not without hazard. Future Islands play September 25th at the Fox Theater in Oakland. Enjoy the clip below.

eightychoices.
Posted by 80choices at 11:29 AM No comments:

The first brewery to get two PUBlication reviews is Hop Valley, one of the many craft beer establishments in Eugene and one of my personal favorites. Alpha Centauri is their Imperial IPA, the big brother to Alphadelic. This "Binary IPA" was far more delicate on the nose than expected. It possesses a nice level of carbonation, an unheralded trait that can make or break an ale. My partner in crime called it, "strangely effervescent." A bubbly white foam caps the almost school bus yellow hue.

The entire interaction on the palette is much softer than the alcohol by volume would have you assume. Which makes this Imperial kind of dangerous. It's smooth going down with a slight bite in the aftertaste. Full of flavor and bursting with Oregon hops, this is a crisp IPA with a clean malt profile. Look for Alpha Centauri in 22oz bottles at your local market, or look to the heavens. 9% | 100 IBUs

eightychoices.
Posted by 80choices at 9:27 AM No comments:

First of all Taj Mahal is going to be there. Second, it's on the Russian River in the Redwoods. Third, there's a beach and tickets are reasonably priced. The Russian River Jazz and Blues Festival is celebrating 39 years of music this weekend. Temperatures in the Redwood Empire have been sweltering as of late, hopefully the forecast for the weekend holds true and the mercury will drop. Guerneville's the spot for a weekend of soaking up some sun, cooling off in the river or just getting your musical fix. The lineup includes War, Jackie Greene, Taj Mahal Trio, Buddy Guy and more. Keep in mind that Saturday focuses more on jazz and Sunday is all about the blues. Enjoy.

eightychoices.
Posted by 80choices at 12:08 PM No comments: 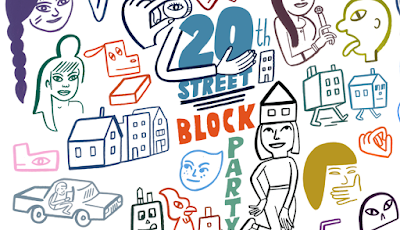 There's going to be a pretty righteous block party in San Francisco on September 12th. This neighborhood bash runs from 12pm-6pm. Thao & The Get Down Stay Down, a favorite of mine, are headlining the event. The 20th Street Block Party is free, so get there early in order to claim  some real estate and catch the other acts. You may want to consider biking into the event. The 20th Street corridor will showcase San Francisco restaurants, businesses and artists in a celebration of their stomping grounds. In the Mission between Bryant and Harrison.

eightychoices.
Posted by 80choices at 12:07 PM No comments:

Labels: 20th street block party, eightychoices, Thao and the Get Down Stay Down

Hot temperatures are always tough to bear, grabbing a cold beer can help to ease the heat. If you're looking for a new option, try Anchor Brewing. America's first craft beer company is still pulling off new tricks. They recently began brewing their Argonaut Collection. One of these limited releases is the Double Liberty IPA (sold as a four pack). The label is beautiful thanks to the hand-drawn art of Jim Stitt. Spring 2015 marked the first time this double IPA was brewed and it might already be out of circulation. It's worth your effort if found.

Leaving the bottle this double pours apricot in color. A robust foam rises to the top. Below the froth lies a fresh subtlety. You can smell how balanced it is. The body appears heavier, it's a bit maltier than a typical DIPA. The malt base is 2-Row Pale, which melds nicely with the Cascade hops. There isn't one overly-menacing trait. It may be a bit sweet for some hop heads but don't let it fool you, it's still bitter. This palatable beast from Anchor is a rare breed, drink responsibly. 8.2% | 90 IBUs

Get ready to get sweaty, Nathaniel Rateliff and the Night Sweats are coming to the mission, on a mission. Drinks will be needed and I recommend bringing your dancing shoes. Their self-titled album has them touring the world, but before they head to Europe they're making sold-out stops across the U.S. One of those hard-to-get-tickets-to shows is at The Chapel in San Francisco, September 9th. Brace yourself for some good old-fashioned soul, swinging, American music. Happy Labor Day.

eightychoices.
Posted by 80choices at 11:21 AM No comments:

A little less than a month ago, Anderson East released Delilah, an album that possesses sonic diversity and poignant lyricism. Initially the songs start out swinging, energized with the snap of R&B. Soulful keys and backing vocals help to shape, "Devil In Me" and "All I Ever Need." These tracks feel inspired, moving from opposing corners like prize fighters dealing with cause and effect. Channeling his inner Ryan Adams on, "What a Woman Wants to Hear," Anderson embraces the buzz of being emotionally punch-drunk. This song is the hornet and the salve, it stings then soothes. He found a way to explain something we've all felt.

Bringing the record to a close is, "Lying in Her Arms," another heartrending number that is painted in truthful pain. Steeped in Nashville's alt-country, his words are fixed to the one he can never forget. You can hear the tremble in his voice. If you want to actually feel music, listen to this song.

Anderson East | "Lying in Her Arms"

Anderson East | "What a Woman Wants to Hear"

Labels: all I ever need, anderson east, delilah, devil in me, eightychoices, lying in her arms, what a woman wants to hear
Newer Posts Older Posts Home
Subscribe to: Posts (Atom)