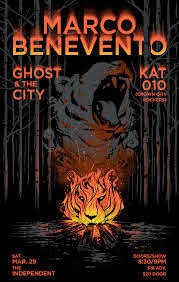 eightychoices.
Posted by 80choices at 7:30 AM No comments:

This past Friday, at the McDowell Mountain Music Festival, STS9 unveiled their new bassist, Alana Rocklin. The quintet opened with a newly minted, New Dawn, New Day. Next they dove into Rent, followed by another newcomer, World Go Round. Wika Chikana, Kamuy, and Vapors, which had a reworked sample and jam, bubbled about mid-set. Golden Gate, 2012, and Circus, with a solo by Rocklin, kept things hyped. Inspire Strikes Back and When the Dust Settles closed out the Friday night, 11 song set. I'm stoked to see this fresh version first hand. Summer time with STS9 sounds scintillating.

STS9 - World Go Round - 3.28 at the McDowell Mountain Music Festival.

STS9 - When the Dust Settles - 3.28 at the McDowell Mountain Music Festival.

eightychoices.
Posted by 80choices at 5:29 PM No comments:

It happens only once a year and every time I get super stoked. I have my personal list of what I really want to grab and then there are those releases that are intriguing. Record Store Day has something for everyone, assuming you have a turntable. Remember, vinyl is not dead. This year's ambassador is non-other than Chuck D. If you don't know who he is, you'd better ask somebody.

Another cool wrinkle in the world of wax is the Adapter Prize. The first recipients of the Adapter Prize were: Tame Impala - Lonerism (record of the year/new release), The Postal Service - Give up (Reissue), GZA - Liquid Swords chess box set (record store day release of the year), and Rodriguez - Searching for Sugar Man (breakout of the year). There are currently four categories, as mentioned in parenthesis. I totally agree with the GZA selection, which was beyond awesome, there was only one copy at my local record shop. I can definitely get behind the praise for Lonerism. The other two, not so much, and I own Searching for Sugar Man. See ya at the Last Record Store.

This year's list is once again overwhelming. Here are some of my favorite releases:

Also worth mentioning is the fact that there will be three types of releases this year; RSD exclusives, RSD limited run/regional focus, and 'RSD first' releases, which means that those albums will be initially released on Record Store Day and then will become available later to a larger retail audience.

Waiting 'Round to Die

One of the more powerful and honest songs in all of folk/country is, Waiting 'Round to Die, written by Townes Van Zandt. I was absolutely captured by the song when first exposed to it. This painful tale was originally released in 1967 on, For the Sake of the Song, his debut album. It also appeared on the documentary, Be Here to Love Me, and on the double LP, Live at the Old Quarter, Houston, Texas. Townes plays extremely attentive versions on both of the latter recordings. Van Zandt is an otherworldly talent, while also being vastly under-known and underrated as a singer song writer.

Recently Michael Kiwanuka laid down an homage to this track with Third Man Records. Jack White's hub out of Nashville released the title as a B side, via the Blue Series. Back in 2013 Kiwanuka played Waiting 'Round to Die at Floyd Fest in Virginia. I encourage any and all to further investigate this song, as well as, Townes Van Zandt.

A little something to ignite the vinyl-fire, record store day is around the corner.

Labels: be here to love me, blue series, eightychoices, live at the old quarter, michael kiwanuka, Third Man Records, townes van zandt, waiting round to die, you've got nothing to lose

Restore and preserve habitat, humans have enough. Kevin Richardson is known to the world as a lion whisperer. His interactions go well beyond whispering, he listens. His level of care and engagement cannot go unnoticed. Who else on earth gets lovingly tackled/hugged by the king of the jungle? His friendship with the beasts of Africa are jaw dropping and otherworldly. Actually they are of this world, it's just too bad more humans don't recognize that earth is not solely ours. We are to blame, no other species is as heinous as the homo sapien (Latin for "wise man"). Stewards we should be, sensitive and aware, willing to share the grandeur and the resources that all life requires to exist.

Kevin is an example for us all. Hero is a word fit for such a man. Everyday I am thankful for our diverse animal and plant kingdoms. Life without nature would be beyond sterile. It's up to us to conserve our natural bio-systems, habitats and ecosystems. Earth doesn't need us, we need it, and a world void of natural wonderment and diversity could lead to our demise. We are no better than the creatures of the wild. We rely on them, while also taking advantage of them and their surroundings at an unprecedented pace. Since we invented the golden rule, we may want to extend that courtesy to the animal kingdom. How come we're the only mammal in the billions?

Below is a video of true inspiration, just don't miss out on the greater message. Thank You Kevin Richardson for giving the animals a voice, and by virtue, a chance.

eightychoices.
Posted by 80choices at 3:00 PM No comments:

SXSW is always a treat for everyone involved. Last night the Fader Fort brought out the rarest of collaborations. Damon Albarn and his band joined forces with Dan the Automator, Del the Funky Homosapien, and Snoop Dogg for a first ever live, Clint Eastwood. Oddly enough, Del, Dan, and Damon had never teamed up on stage to perform this track live. How cool is that? Gorillaz tracks from 2001 still sound so fresh. This one was well worth the wait, "in its purest form."

Is it just me or does the crowd not know the words at the end? Hopefully that meant it was their first time hearing it, which would be ridiculous, in a good way. Live bomb-track of the year perhaps?

eightychoices.
Posted by 80choices at 12:12 PM No comments:

Steve Nash films an honest response to the motivating factors that fuel his dedicated rehab. Whether or not he plays again, I will always be a fan. It was refreshing to hear him say, "yes, I do, have to take that last little bit." There's also a softness reflected when Steve speaks to the camera about those, "two meaningless games." Cheers to director Ezra Holland for his vision as well.

Hockumentary and Grantland present, The Finish Line: Episode 3, The Backlash.

eightychoices.
Posted by 80choices at 8:46 PM No comments:

Tool, currently on the west coast touring, has been targeting older songs regardless of a rumored new album. They kick-started things in Spokane and have been primarily playing the same songs at each performance, changing only the order in which they are played. Selections such as, Forty-six and 2, Schism, Stink-fist, AEnema, B'Boom (King Crimson cover), Lateralus, Jambi, Pushit, Intension, and Hooker with a ..., have shown up repeatedly. In an attempt to "hide" the band, they're accompanied by streams of imagery splashed in laser beams and confetti. Tool returns to the Bill Graham Civic Auditorium tomorrow night.
Posted by 80choices at 3:44 PM 1 comment:

Prince continues to roll out new music with his band, 3rd eye girl and the New Power Generation. As far as I'm concerned, he's one of the most genuine rock and rollers alive, while being equally intelligent and virtuosic. Recently he took over the rebooted Arsenio Hall Show, unleashing three stellar songs and impressively partaking in an interview. He opened with the freshly minted, Funk N Roll. Also played on the air were Mutiny, and his classic, She's always in My Hair. Currently no one else in music is able to match his ability to mesh rock, funk, pop and whatever the hell else he's willing to weave into his tapestry of genius. And by the way, who the hell else could pull of that wardrobe without being totally bashed by both fans and media? There's only one Prince, we should be thankful for the many musical gifts he's given us. Be on the look-out for his upcoming album. Below is a string of videos showcasing his material, as well as, his unique and inquisitive personality. All hail the Prince.

SHE'S ALWAYS IN MY HAIR

Steve Nash continues filming his journey to recapture his physical health, sadly the two time MVP is back on the shelf. He's missed multiple games after colliding with Kirk Hinrich of the Bulls in February. The point of contact occurred in the same area of his left leg that was fractured last year, leading to prolonged complications. With the end of the regular season steadily approaching, coupled with the Lakers terrible record, many are speculating that this could be the end of his illustrious career. Will LA waive him, invoking the stretch provision? Lakers coach Mike D'Antoni thinks Nash will be inactive for the remainder of season. Hopefully Steve finds peace while fighting to return. Unfortunately the ball is in the Lakers' court and father time is undefeated.

eightychoices.
Posted by 80choices at 6:40 PM No comments: