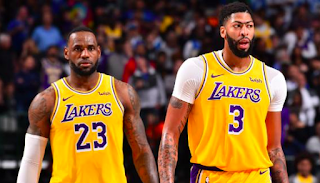 All-Star weekend is a reminder of the immense talent the NBA possesses. The break allows us to assess the Association. The events and game itself showcased how basketball is both fun and exciting, perhaps like no other major sport in America. I thought the ELAM ending was good. I also liked how each quarter felt like a mini game, bringing more of a competitive edge. Third quarter intensity ramped up near the horn as teams jockeyed for point totals leading into the fourth. Big ups to both squads for bringing more to the All Star game.

Los Angeles
I'll begin in the City of Angels due to the star power of both Staples Center teams, and an unfathomable tragedy (I'll briefly address this at the end). The center of the NBA universe seems to be LA. The Lakers stood pat while the Clippers made a move at the deadline. I thought it was okay, and in some way spiritual right, that the Lakers didn't make a move. They were probably doing their due diligence behind the scenes, and yet it may have felt inappropriate to overhaul the roster. Whether or not they should have is for the talking heads to debate.

The Forum Blue and Gold destroys teams they're suppose to, and although they have a winning record against plus .500 teams, they don't always look as great against superior competition. The primary teams to be concerned with in this regard are Milwaukee, Toronto, and the Clippers.

It's no secret that the Lakers offense looks pedestrian when LeBron is off the court. Do Davis and James have to do more? Perhaps in the playoffs, which they are capable of. The ball is almost always in LeBron's hands, but when he does turn it over, I want him to hustle back. On botched possessions he rarely crosses half court before the opponents trigger a shot. I'm not expecting game seven of the Finals, chase-down LeBron, but more effort to invigorate his teammates wouldn't hurt. His "free safety" role on defense sometimes confuses his help-side defenders who are trying to rotate and recover. I want him to be more engaged on defense. Also, too often he settles for that mid-post fade away. He should attack the rim to score or facilitate. Ultimately I'm just nitpicking my favorite player because I want his squad to shine. Maybe he's angling for the playoffs.

Davis could use a jolt of assertiveness. I'm wondering if he'll play as though this team is his. It's no secret he's a beast on both sides of the ball, the best two-way Laker. Davis leads the team in scoring, rebounding, steals and blocks. His PER is more than 3 points higher than LeBron's and he hits free throws. AD's a machine sent to earth to wreak havoc on basketball opposition, and LeBron's his running mate. So why doesn't he consistently get touches when it's crunch time? Again, I'm nitpicking an all-time talent. I just want him to excel.

The Clippers traded for a ball-stopping Morris twin. They appear to be the ultimate Dr. Jeckyll Mr. Hyde, lacking consistency and chemistry. PG and especially Kawhi have powers to summon once postseason begins. Regardless of the talent, chemistry and health play major roles in the march toward a Finals. Will the Clippers have enough court time together to build cohesion? 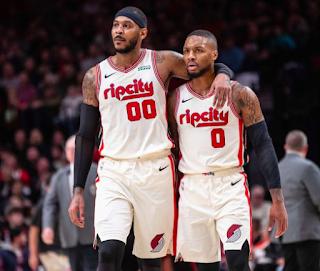 Dame Time ? !!!
How severely did he strain his groin? Why did he even attend All Star weekend, especially if he had to move around in skinny jeans? There were more than enough rappers in Chicago to fill in, however none as slick as Dame. Can he and the Blazers catch the Grizzlies? They can if he plays in most of the 26 games that remain.

Gary Trent Jr. is making the leap. GT's play has been a revelation. He plays with confidence and physicality. If he continues to shine his value to the team will only grow moving forward. He's earned his increased minutes, especially in the fourth quarter. Trent's proven he has the onions to take shots and make them. He's an NBA scorer. Good on him for continuing to work hard.

Ariza's been a helpful surprise. His veteran smarts, long limbs, and ability to shoot the deep ball has increased the Blazers ceiling. Swanigan may be a bull in a china shop, but he plays hard and brings a bit of nasty onto the court. Simons needs to recapture his swagger and that ability to be lightening in a bottle on offense. He showed flashes of it just before the all star break. Little is getting little to no run, yet the new guys acquired from Sacramento are, what gives? If Dame misses prolonged time, McCollum better pick it up. CJ where have you gone?

Minnesota or Golden State?
Who won the trade? Which key player is better? Who's contract is more of an albatross? Will Russell help the Wolves out of dysfunction, or just lighten the load for Towns? Can Wiggins excel as the Warriors fourth best player? Which guy lasts longer on their new team? The answers to these questions won't be known until next year. Only one team will continue to stink; hint, it's not the one from the Bay area.

Houston Skill Ball
Unleash the beast...Westbrook that is. I'm all for a front office and coaching staff that go for it. Why not play your best guys? Size be damned. If this version of the Rockets fully gels heading into the playoffs, Harden and Westbrook will not be fun to defend. In the meantime it sure is fun to watch.

Milwaukee Finals bound?
A scenario does exist that could prove to be worrisome. If Milwaukee has to play Miami in the second round and Toronto in the conference finals I'm not sure they advance. Each team stands in their way with 28 games remaining. Giannis is beyond superlatives, but the rosters and coaches for Miami and Toronto are decidedly better in my opinion. I for one want those matchups to unfold. If the Bucks only have to play one of either the Heat or Raptors, they'll gallop into the Finals. Oh, and if you're wondering about Philly, they stink.

2 * 8 * 24
Considering the heavy hearts that are obvious in all of us, this year will be remembered for a deeply sad reason. A note of positivity I have taken from this tragedy is to make each day count. A super hero-like star taught me to honor that which you love and to always try your hardest to do your best.