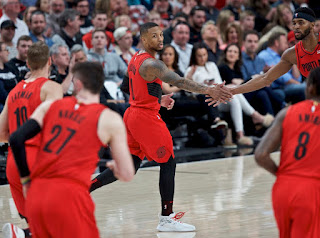 I'll confess up front, I've been a Damian Lillard fan since his rookie year and forever sold after his ROY speech. I have another think piece question; is Damian Lillard the best true point guard in the NBA? Simply put, he controls the game. He gets his guys involved and has the ability to take over a game. He's fearless, willing to take the gut-check shots. His IQ and in-the-gym range make for a lethal combination. His Physical skills are better than most of his more heralded peers, other than Westbrook. And there in lies some of the conversation. Who is still a traditional point guard?

Westbrook is a point guard in name, his game is more along the line of a 2-guard who also happens to triple double with a high usage rate. He's a modern Big O. Curry's an alien but his stature makes him the point. However, on his team everyone shares the ball, so he feels more like a shooter than a traditional one. His gravity strikes fear. We've all seen it, Iggy and Dre initiate much of the Death Star's action, sometimes KD, sometimes Steph. It's Curry's shooting that makes it all go, or in others words, makes the defense have to both stretch and stay connected to he and Klay. And that's the idea, who is the point guard on a team like Golden State? We've never seen anything like them. It's basketball symbiosis. They have three of the deadliest players, each able to bust defensive schemes even when they aren't touching the ball. It's nuts how defenders have to stay attached to three separate snipers while still thinking help and containment. It's an F'ing cheat code to the tune of five straight Finals. Kyrie is a shot maker to the Nth degree. As good as his stats and advanced analytics are, I think I'd rather have Dame. First of all he's a better team mate, which goes a long way to being the one. Second, he has a better physical skill set, and is probably a better defender. I realize Kyrie has hit an all time onion shot. Still, Dame is a more stable presence, a consistency that has repeatedly taken his squad into the playoffs, which is no easy chore out west. It'll be six straight appearances this year. Ask LA fans if they'd like Dame. Ask Boston too for that matter.

If you add in Lillard's durability and juxtapose it against the injuries that have bitten the three players mentioned above, the debate is legit. My apologies to the rest of the point guards in the NBA, but I think those are the top four. Dame's got a blue collar mentality and a willingness to do it the old way—with his guys, his team. I'm a fan. He has plenty of swag, yet remains humble. He grinds. He's better than good. And he may just be the best true point guard in the NBA. 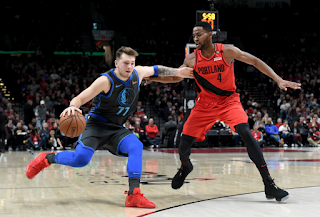 Luka's patient, to score, probe, or pass. He's a rookie who comes in playing chess, instead of connect four (sorry Rondo). He's also got the guile of a veteran, like when he gets someone on his backside and just keeps them there CP3-like. The major difference is, he has size. Coupled to his skill, strength and craftiness, his potential appears to be limit free. He has an almost old-school game, but with new-school abilities. In a nutshell, he does what he wants, which is a trait very few rookies ever attain. The things he's shown in year one just heightens the imagination for what's in store. There's a new sheriff in Big D, it's Lone Star, Luka Lone Star. Giddy up.

The Run Down
The playoffs are around the corner. It's still a bit blurry in terms of first round match ups. It'll come into focus as the west battles for seeding. The east is shaping up to be perhaps even more intense, as four or five teams have legitimate aspirations for conference supremacy. What happens next is any body's guess. I'll go out on a limb (just kidding) and predict Toronto vs The Death Star. Dark Side in six. Here's to hoping for a Finals that has new blood from both conferences. One can wish right? Only in the NBA.