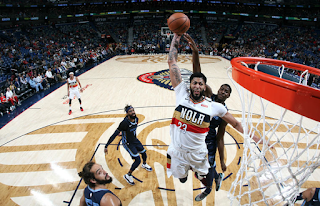 The NBA's regular season is nearly half over or close enough for most teams to assess the action fairly. The western 9 and 10 seeds would be 6th and 7th in the east. There are 12 teams out west with a plus point differential, only seven eastern squads can claim that. However, the east's top five teams do possess high end talent. As the year progresses I'll try to keep hitting on some hot topics. In the meantime, here's what to watch for in the NBA.

All things in the NBA seem to begin or end with LeBron and even if they don't, they somehow do. His injury has zapped the buzz in LA, they're 2-5 in his absence. The Lakers played the Maverick's last night and a big second half helped them to take down Luka (more on him later). A couple of quick takes on the Lakers. Their defensive metrics are good and yet I'd like to see them utilize their youth, speed and length even more. Rebounding on defense is an aspect of concern with or without LeBron. KCP is their best catch and shoot guy for better or worse. They look good when they can get out and run. In the half court they should look to penetrate and kick more, it helps to set up the hockey assist swing pass if the initial catch and shoot option isn't there. Lastly, they're a poor free throw shooting team, hopefully that remedies itself. 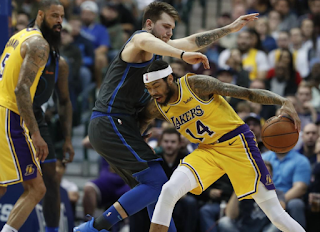 With all those topics and swirling trade rumors the Lakers were fourth in the west at 20-14 when LeBron had his Christmas day setback. Not too shabby when James is leading the way as the Lakers have had to also deal with injuries before his own. I'm left to believe this roster is not the one we will see after the trade deadline or once the buyout market rounds into form. One thing's for certain, LeBron and the Lakers will dominate the headlines no matter who's on the floor. Bradley Beal, Kemba Walker and AD are great stars to stir the drink with.

With all due respect to Brooklyn and New York this is a three team division. Make no mistake the eastern finals could easily showcase an all Atlantic battle. I'm not totally sold on the fit in Philadelphia. Butler needs to get over himself which would probably help everyone. The other easy observation is the lack of team shooting, exacerbated by Simmons own inability to shoot. He is not the ideal fit for The Process and let's not kid ourselves, Embiid is the guy in The City of Brotherly Love. Markelle Fultz anyone? We'll have to wait and see what happens with the 76ers.

Which leads to Boston, what's wrong with the Celtics? I can't bring myself to fully throw Brad Stevens under the bus, but is some of this his fault? Could a couple of guys be playing better? Maybe Tatum shouldn't have worked out with Kobe to refine the long two (aka the worst shot in basketball). Maybe Jaylen Brown does feel isolated as a chess playing intellectual who always hears his name in trade rumors. Perhaps Kyrie will go James Harden or maybe he won't. What if he can't? Ah Boston, the team that had the post-LeBron puzzle solved. Perhaps it's them who needs the solving.

North of the wall has never looked so good. Kawhi may be a rental or he may take the Raptors to The Finals. Whichever story unfolds Toronto did what was best for the team. Kyle Lowry's injury is definitely a concern but the Dino's have looked good for the most part regardless of the lineup. They have depth, they know there systems on both sides of the ball and they have a potential MVP candidate. And yet our judgement of them, as well as their fate, will only come into focus once the playoffs have commenced.

Antetokounmpo is otherworldly in his talents and intensity—he is both the high tech updated version and the old school. Can't shoot, who cares? He pretty much goes wherever he wants. When he is thwarted it just creates an even nastier highlight of him dunking on someone who tried. There's a tenacity to his game that makes me believe he will do anything to win when the chips are truly down. With the Bucks ascending hopefully his team will make a deep run in the playoffs so we can see him perform under heavy pressure. Milwaukee is currently atop the standings in the east. Giannis is obviously responsible for their success, but Coach Bud's new schemes have accelerated their play as well. Welcome to Giannis' world, it's party time, excellent.

New Orleans slump to kick off another year with AD has been a surprise. I just figured they had figured something out at the end of last season and would further morph toward that type of team we saw against Portland in the playoffs. They have not been able to win enough games or stay healthy, a voodoo curse perhaps. There are few paths to fully righting this ship. One is if Davis can replicate his performance from the end of last year times two to the second power. Another could be the emergence, or more likely the arrival of, a third star to fill the scoring void if Holiday under performs or Davis simply plays human. The West is brutal 1 through 14 and unfortunately for the Pelicans they're on the outside looking in. Which leads all conversations to, "will he stay or will he go?"

LUKA !!!
One question pretty much sums up how spectacular this young basketball Jedi has been:
WHO WOULD YOU TRADE LUKA FOR?

Only in the NBA,
eightychoices.