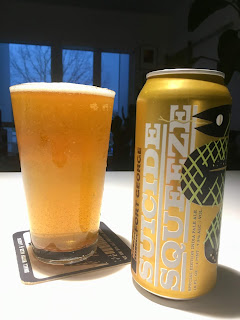 Suicide Squeeze is a "special edition" IPA from Fort George in collaboration with Suicide Squeeze Records. Music and beer go well together and this unfiltered IPA does not disappoint. There is an earthiness to the nose and once poured you will notice some serious particulates. The foamy head that forms early fades with each drink, leaving its legs along the pint glass. There is a slight bitterness up front that transitions into a more balanced IPA taste late. There's a lingering difference that makes me wish this India pale ale was available year round. Oh well, at least I got my paws on it.

This special edition IPA was brewed in late November and could be hard to find. Fort George is only distributed in the Pacific Northwest. Happy hunting and enjoy Responsibly.

eightychoices.
Posted by 80choices at 6:15 PM