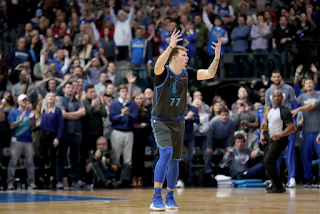 The NBA is just too good. It feels so much different, so much better than the No Fun League. Pace in the NBA destroys MLB, I know, apples to oranges and I do love playoff baseball. Yet our collective attention seems destined to gravitate toward basketball, soccer, or even hockey. The constant movement in those sports is magical. It's captivating. And that's the point, the greatest target for consumption and consumerism is our attention, our eyes. The Association has had mine since the 80's. Below are a handful of takes from around the NBA. Beginning with the last question I posed over a week ago. Who would you trade Luka for?

Honestly, who would you trade Luka for? He's already a seasoned rookie who can pass and see angles that 15 year veteran point guards will never make, plus he can launch deep step-back 3's or drive to the hoop without fear of the moment. He's the real deal and he's on a rookie contract with an owner who has shown to be loyal (Dirk). Really, who would you trade him for? Luka's perhaps the best rookie since LeBron.

To be honest, I'll say, Giannis or Anthony Davis, maybe. If you knew you were getting them for their entire prime starting now, sure. It would still be difficult to make that trade. You could argue LeBron or Kevin Durant with their stratospheric apexes. But they're both in their 30's and would demand serious coin, as well as other team-wide concessions and considerations. If a trade involving those two occurred it would be shortsighted. That leaves James Harden, Curry, Kawhi and Paul George. All amazing talents, who combined to the four mentioned above, comprise eight of the top ten talents in the NBA. And I probably wouldn't trade for any one of them straight up. It's beyond perplexing, I know.

His legend is growing and he's certainly made Dallas both competitive and relevant. Regardless of recent injuries or trade talks, Luka may be so good that Carlisle and Cuban are lured into making the playoffs. A lot of us would like to see the Mavericks make a move before the deadline. I also understand if they don't want to risk future cap flexibility or roster construction. Dončić's capabilities, coupled to his limitless ceiling and playing style, make him one of the most desirable young stars to play alongside. He is the future, as well as the Maverick's biggest asset in recruiting future free agents to Dallas. The Luka star shines bright in the Lone Star State.

You know who Atlanta would trade Luka for? Trae Young, yikes. I know it's unfair, but those two will be linked in perpetuity. Even if the Hawks got an additional pick, I don't care, have they taken notice of Luka? Let's make this quick. What is the front office doing in Atlanta? And how long do they get?

Minnesota Timberwolves
I want the Wolves to be good, I really do. Please Minnesota find a way to fully utilize Karl-Anthony Towns. He is a transcendent talent of offense. I've even watched him handle the Warriors. He cannot be stopped if you unleash the beast. I just railed on the Atlanta front office, is Minnesota's any better? Their situation might beam some light at the end of the tunnel, but that's only because they have Towns. Even with last year's playoff appearance the Timberwolves have been a mess since KG was traded to Boston.

I'm totally behind Saunders as the interim coach, it's perfectly fine. With that said, if Minnesota is to have a heart beating identity, they need to look for their next leader in a more progressive way. My short list of most desirable would look like this: Shaka Smart, Jay Wright, Chauncey Billups, everyone else. The thorniest issue for the next leader of the wolf pack will be what to do with Wiggins?

I'm going to go to the dark side for a minute. The Timberwolves owner is of the old guard so to speak. His NBA investment is worth about a billion dollars. If the team and the city of Minneapolis aren't careful, the Wolves could just as easily be relocated to Seattle. The Pelicans aren't the only small market team with a young talented big man and empty seats. I feel bummed to type this, but those are the two most likely teams to relocate. Who are the other possibilities? I've been to Sacramento, their new arena is the best in the NBA. Milwaukee just unveil their modern arena which will keep them put. Detroit's not going anywhere, plus they have multiple titles. Maybe the Magic, but they too have a recent, big money arena. The Target Center is not the greatest regardless of the renovations. I'm not sure of Minnesota's attendance numbers over time, but it's probably ranks near the bottom. Their best draw is the training, practice and health facilities they recently built with Mayo Clinic. Taylor could cash in his NBA chips and further stockpile for his heirs, at his age he may want out. I for one want the Timberwolves to always be in the Twin Cities.

James Harden is unREAL
Harden is in really rare air. His current ballistics performance is only rivaled by Kobe's selfish 2006 campaign in which he played one against five and MJ's ridiculous year in '88. Those are three of the best offensive showings ever by shooting guards. What's crazier is that Harden is doing it at the most efficient rate of all time. He has the two highest efficiency ratings for players with a +30 usage rate. He's led the NBA in free throws for five straight years. During his last two intergalactic rocket shows, where he scored 57 and 58, not one of those baskets came via assist. Think on that.

James Harden is the best offensive player in the Association right now. What he's doing is unreal. I normally don't dig the super iso heavy play, but I find myself cheering for Harden. He single handily beat the Warriors a few games back, even with the refs spotting them 15 feet out of bounds. It's been fun to watch him blast off on opponents. It doesn't matter who guards him or what type of defense is thrown his way. Fun fact; he's run more iso plays than any other team, not player, team. Whoa. I want him to silence his playoff critics. After all, Atlas shouldered the world, he's only shouldering the Rockets. Keep on keep'n on. Take note other solo superstars.

The Field or GSW?
The teams and the talent in the western conference is stupid. At the top of the heap is the Death Star in Golden State. It doesn't matter that Draymond gets to bark, curse and stomp at officials. It won't stop this year's parade if KD leaves. Who cares if Klay loves his hand too much. I won't be less persuaded when they show off Cousins. Plus they have that guy named Curry. THEY ARE STILL THE FAVORITES. If someone asks me the field or Golden State, I'm taking the Warriors, even if they're not my team. Like the Death Star, they destroy worlds. Amidst all the fresh buzz in the NBA, and rightfully so, the Finals will have the same conclusion. Case study number one, the beat down they gave the Nuggets in Denver (51 in the first quarter, c'mon). Unless I just reverse jinxed them. Nah, that's not even possible, because in the not too distant future they will open their money factory on the water in San Francisco. The present is the future.

Only in the NBA,
eightychoices.
Posted by 80choices at 3:45 PM