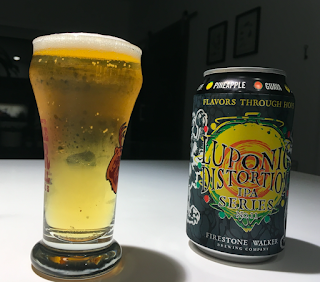 The eleventh iteration of Firestone Walker's Luponic Distortion has reached my local grocery store (the batch I brought home was brewed Dec. 7th). Early observations were obvious; it possessed good carbonation and effervescence with a long lasting foaminess, plus it's super clean and really clear. I like it!

Initially, a subtle hop-driven bitterness gives way to notes of guava and slight lemon, I did not taste pineapple as suggested by Firestone Walker. Luponic #11 is super easygoing, almost too drinkable if ya know what I'm say'n. This would be a great beer for someone who doesn't prefer IPA's but wants to try some. I was stoked to get a taste of California's central coast up in the wintry lands of Portland. Drink responsibly.