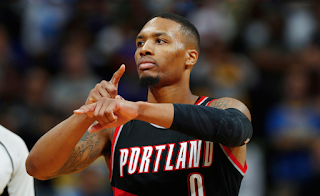 Lights, cameras, action, the NBA's second season is set to kickoff on Saturday, April 13th. First round match ups are looking like a blood bath out west in the varsity conference. Back east there appears to be two good battles early on, as Brooklyn faces Philadelphia and Indiana plays Boston. The second season is upon us. To the victor goes the spoils. Here's to hoping someone spoils it for the Death Star.

The West: The Western Conference is going to be a gauntlet. What sort of damage would the Spurs or Clippers wreak if they were in the east? The reward for LA is a series with the defending champs. San Antonio gets to travel to the Mile High City, where they will try to Popovich the feel-good Nuggets. I don't think the Clippers will win, but they will make it tough. In the event the Clip-joint do the impossible, kudos to them for reverse jinxing the Death Star after they wore the "we believe" jerseys at Oracle's finale. A team with three all-world players plus Green and Iggy, shouldn't wear anything that suggests underdog status. With that said, Doc Rivers has no love for Golden State and will most likely encourage a tribal ritual to further their chances. Good luck LA, I'm pulling for you. San Antonio on the other hand has a real shot in my opinion. They have all the pedigree and experience. Maybe Pop's squad can muster some early magic and advance to the second round against a two seed with very little experience.

Two of the most interesting series are out west. The three six is gonna be fire. The bad news for my newest hometown team is that their diligence in securing a home seed brings them an opponent that swept them in the regular season. I'm a big Dame fan and he's one of the more unstoppable pick and roll maestros in the NBA. The flip side is OKC's defense, and if locked in, it can be smothering to say the least. Oklahoma has its own worries, George's shoulder, Westbrook's jumper, and their lack of outside shooting. I'll be pulling for Rip City regardless of my affinity for Westbrook and PG. I think the winner of this series ends up in the western conference finals. I wish the Blazers were whole, maybe "can't play Kanter" can fill the void left by Nurk's injury (if not, hello Collins). Portland's the deeper team with a solid second unit; Lil Curry, Hood, ET, and Collins can bring it. Dame and CJ versus Russ and PG should be good. Rip City was ready for a run, please basketball gods, look favorably upon the Trailblazers. This series, as well as Houston versus Utah, have the potential to be an all out slug fest. 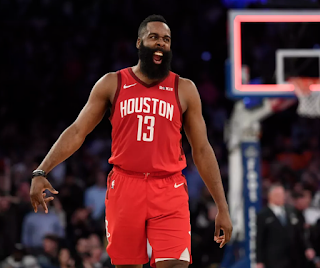 Houston hosting Utah has the makings of a fiery feud, having faced each other last year in the second round only adds fuel to their fire. Differing playing styles will wage war during this series. I'm not sure which team has the better chance to upset the Death Star, probably Houston, but these two teams are both capable of clashing with the champs. You could easily argue that these are two of the hottest teams entering the playoffs. I'll be rooting for the Jazz, hopefully they can score enough, but there's part of me that feels like Harden is on a mission. The Rockets were a hamstring away in last year's western conference finals. The 3 through 6 seeds comprise the teams I thought could challenge Golden State. It's really any body's guess as to who will survive the first round. The Dark Side has to be the runaway favorite, duh. Will the west be represented by someone other than Golden State? Maybe the unthinkable can happen.

The East: There seems to be less drama in the east regardless of the dreamy potential for a chalked filled second round. The fact that a non-LeBron team will be represented in The Finals for the first time since 2010 adds some gusto to the journey. Honestly though, I expect chalk to win out. There are two teams that could play eraser. Philly will get all it can handle from Brooklyn, especially if they start the playoffs with Embiid in street clothes. I've wrote it before, the 76ers could be the biggest threat to the western conference champ (or the Raptors), assuming it's the Death Star. The big what if is Embiid's knee. If Joel is his normal destroying self, Philly should smash. However, if he isn't 100 the Sixers could get got by the Nets. Philadelphia has trouble containing crafty guards. That's exactly what Brooklyn throws at it's opponents. D'Angelo Russell has been trending seriously upwards, he's got game. Brooklyn's loaded with perimeter players who are multi-positional, both on offense and defense. Their spread, off-the-top attacking offense could spell trouble for Philly, especially sans Joel. And another thing, I think Brooklyn has the better coach if it comes down to that. I think the 76ers  should win, just don't be surprised if they get upset.

When Indiana lost home court to the Celtics it probably sealed their fate. This will still be a gritty contest between teams who trend differently in more than one way. Boston possesses talent and depth, while Indiana has heart, effort and camaraderie. Which will win out? I'll go with green. It's too bad Oladipo got hurt and the Pacers fell to the 5th spot. The other eastern series should be chalk. I'd be dumbstruck if Milwaukee or Toronto lose in the first round. Giannis is ready to ruin the east, he's wired differently and his only friends wear the same jersey. I expect the Bucks to come out clicking. 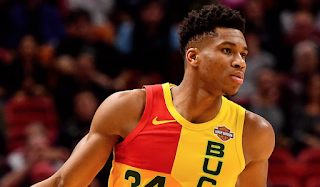 MVP: Giannis or Harden, Harden or Giannis? The debate will linger far beyond the presentation of the Maurice Podoloff Trophy, that I'm sure of. Who's the more deserving candidate—a question that has two answers? The bummer is, one irreplaceable and transcendent star is going to be left empty handed. Antetokounmpo is the anti-Hollywood superstar who can do everything on both sides of floor, a gift to the NBA, a young man with humble roots, who's abilities are limitless. He has jettisoned Milwaukee to the best record and home court advantage throughout the playoffs. Giannis played in 72 games and averaged nearly 28 points, 12.5 rebounds and 6 assists. His 30.9 PER and WS of 14.4 are eye-popping. Did I mention he's also a force on defense.

James Harden is an offense by himself. Say what you will, but the Beard just averaged 36.1 points per game, plus 7.5 assists (most of those assists are three pointers, the others are lob dunks and layups). Doing a little on-the-fly math, I came up with 19, those are the points/game that Harden generates via assist. That means he's accounting for, at minimum, 55 points per game. That's an all time number. He's a supernova on offense and single handily kept Houston in the mix for a top four seed. James averaged 36.1points, 7.5 assists and 6.5 rebounds over the course of 78 games. His PER was 30.6 and he had a WS of 15.2. Did I mention he totaled 2,818 points this year!

This will be one of those years where we actually have two supremely viable candidates for MVP. You can look at my rundown of predictions for awards here. I'm still leaning towards Harden, but damn if Giannis' game against Philly didn't make me think twice. Giannis does it on both ends, James is a cheat code meant to disrobe defenses, each is immensely valuable to their team. Is it who's better, or who's more valuable? Either way it's a difficult decision.

The playoffs have been injected with some new blood. Whether we make predictions with our head or with our hearts, this should be fun to watch. I'll try and revisit some topics of interest as the playoffs unfold. Buckle up, the second season is about to begin!

Only In the NBA,