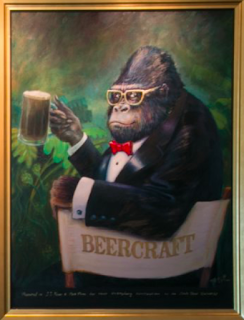 Holidays are a time for gluttony, that can sometimes extend beyond the new year. I headed south on the 101, gift card in hand, to sip some suds at Beer Craft. With a strong tap list and a deep selection of bottles, this local libation dealer is tapping into the market. Beer Craft also specializes in shipping your bottles. Sonoma County is a destination for foodies, beer geeks and wine aficionados.


Pulling up a stool to the communal table situated by the taps, I perused the offerings. The draught list leaned heavily toward the hoppy end of the spectrum, which I dig. I decided to go for two different pale ales. My first selection was from AleSmith, who have merged two of my favorite things, sports and beer. The SD Pale Ale .394 is a homage to one of the best hitters in baseball since I've been alive. Tony Gwynn will always be remembered as a classy ball player and an even better person. The .394 encompasses a crispness that is sheltered beneath an airy head. A big hop bouquet hits your nose before tasting how clean it is. There's a lingering quality to this ale, in a good way. Look for this delicious selection on draught or in six packs. AleSmith does it again. ABV 6% | 26 IBUs

My second choice was a single hopped pale ale by Sante Adairius. Brewed with Mosaic hops and 2-row malt, this stripped down pale was far more subtle than expected. I didn't get that same nose or punch from the Mosaic hops as I have in other beers. On top of the hazy golden hue lies a foamy head. As I snouted it out, a popcorn-like quality kept hitting my nose. That same popcorn trait also popped up late on the palate. ABV 5.8%

I also walked out with a couple of bottles because you cannot use a gift card on draught beer. One is a Gose-style Saison IPA from Stillwater Artisanal Ales; it goes by the name Money Tree$. The other is a Belgian-inspired, Bad Habit from Jack Rabbit Brewing.