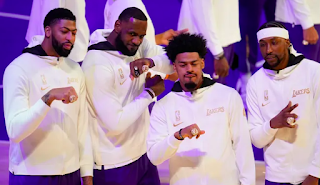 The NBA is back in what has been the fastest turnaround in pro sports history. Aside from early training camps, only the Rockets were inept while returning to their home market. A small group of Houston players got together for haircuts, prompting contact tracing protocols. James Harden disregarded most forms of professionalism, respect and safety. He may be a walking playoff birth, but I will no longer be cheering for him. Houston was the only team reckless enough to cause a cancellation during the first slate of games. The Association will hopefully deal with less boneheaded moves down the road.

I wish all the teams good health and sound bodies. I'll begin to dive into some hoops thoughts with the 20-21 season underway. I watched the battle for LA on opening night and then caught the Blazers on night two. I obviously tuned in again for the Christmas day bonanza. Whether or not I was fully compelled to watch, games were beaming onto my screen all day. I'm glad to see it back. Let's touch on some topics from an assortment of games... 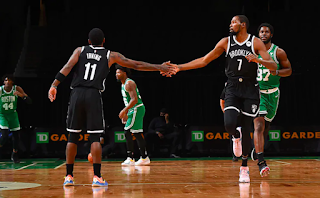 Brooklyn looked good, like really good, on both nights of action. KD was back and Kyrie had it going. Nash's vibes are all over this team. If team play and the extra pass mentality are truly pillars, this team will be the best in the east. The Nets defense was also frisky. Often times their scheme on that side of the ball resulted in the opposition being forced to act with the least offensive-minded player stuck with the ball, or a last second bailout (seen time and time again in the Boston game). Golden State was no match for this team from the Borough of Brooklyn. More on the Warriors later.

It's good to see Durant back. In the third quarter of their second game against Boston he totally took over. His jumper is as pure as ever and there's no hesitation on his part to go by people. The threat of his wet jumper causes not only his man, but the entire defense to have him in focus. With Kyrie sizzle'n and KD unassailably looking like KD, a healthy Nets team is the team in the east.

Golden State is in trouble, on a Yikes level. Curry hasn't shot the ball well, perhaps the result of defensive schemes that have no one else to worry about. Sure Oubre plays with fire and grit, but he and the Andrew Wiggins experience are shooting like 2 for 100. They don't make shots. Curry alone with this roster hasn't the same gravitational pull. This year is going to be a rough one for dubs fans.

On a positive note, Wiseman belongs. He's springy and has the athletic abilities to overcome inexperience. It'd be nice to see Steph create some on-court chemistry with the young big man. The rook has potential to be a rim-running monster. Curry and Wiseman should be running some defense-wrecking screen and rolls. That two man game could serve up some mismatches in a hurry, both directly and on the backside. 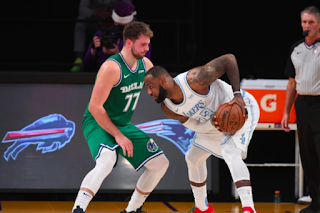 The Lakers are a decidedly different team, as such they will need time to iron out any newly packaged wrinkles. In the opening night battle for LA the championship team looked unfamiliar on defense, a calling card that I'm sure will be renewed. Remember calling cards? Overall their speed didn't feel right. The Lake Show came out for big rings, while the Clippers came out with a huge, playoff-blunder-sized-chip on their collective shoulders. The Clip joint had a longer offseason and bye-bye P actually hit shots instead of clipping backboards.

With that being said, LeBron didn't play particularly well when compared to his own lofty standards. He missed a few bunnies at the rim and had some serial turnovers. LBJ also mildly rolled an ankle. Wise to manage his minutes in a year so condensed. After all, the Lakers are playing for Championships.

AD didn't play a ton on ring night either, but did flash some of his Finals mojo. He's tough to stop, sky's the limit for Davis. Other bright spots in the loss were the flashes Schröder showed and how well Trez seems to fit in while producing. Gasol was a step slow and in constant foul trouble. As the season wears on he'll be tasked to bang bigger bodies and be up to speed come playoff time. There will be a future time and place when we sing his praise. The Lakers aren't overly concerned with their December record.

When Dallas played LA on Christmas we began to see how potent this Lakers team could be; mind you the Mavericks are not known for their defensive prowess. LeBron showed out a little, AD is unstoppable in those gotta get a bucket moments, and both Schröder and Harrell are shot makers who ain't scared. Los Angeles has a lot to be thankful for this basketball season. 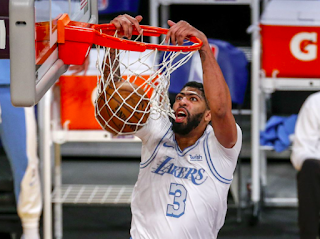 Rip City got ripped. Utah looked every bit the team that could be dangerous come playoff time, Portland on the other hand has some work to do. As a Blazers fan, and Dame believer, the upgraded parts need to be properly used. In an ugly loss Lillard was taken away by the Jazz defense. Whether Dame should've been more assertive is a valid point, yet I don't think that his change of demeanor would have rendered Utah's precision any less damaging. He did perform terribly however scoring only 9 points. Covington and Jones Jr., the two new forwards brought in, combined for 10 points. Those type of performances are not going to get it done. CJ was the only Blazer who showed up.

Portland looked out of sorts on both ends and they cannot take a step back offensively as they try out new tactics to improve their defense. I'm worried that Stotts is overthinking things a bit; Nurkic and Kanter are not fleet footed. Giles, and perhaps Collins when he returns to action, could be the type of bigs ready to contribute to a more aggressive approach on defense as it pertains to the perimeter. Realistically they should aspire to rank somewhere between 10-17 on defense. The Trail Blazers gotta muster something from within, something more than the norm, which I believe they are capable of.

If Dame is going to get singled out, the playbook has to diversify on offense too. Mix in some actions where Lillard is moving without the ball. Spring him free without him dribbling the ball. Dame might be the best in the league out top with the ball in his hands, but you can't do that all the time. This team is built to score and Portland needs to be elite offensively. With ten fewer games in an über competitive west, implementing new schemes and players is an even tougher ask this year. I'm intrigued to see how the Blazers play tonight against a haphazard Houston team. Let's go Rip City.

With so much to process in the world right now I understand how minuscule this post is. I also have an obvious affinity for hoops; there are worst things to be sidetracked by than basketball. Thanks for checking in. Soon I'll be dropping the year-end roundup of my favorite music. Cheers to all during the holiday season, have a happy new year too.

Stay safe and be kind to one another,