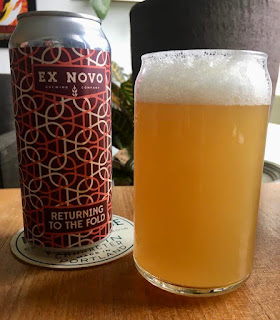 Ex Novo is a ritual at this point, they're my go-to, thanks Ex Novo. On my last visit to Flint Street they rewarded me with a newly canned single hop hazy IPA, sorry that was a mouthful. Anyhow, this hazy was good, better than most of the hazy's out there. I prefer west coast-style IPA's, but this offering was a nice surprise. Nelson hops run alone in Returning to the Fold.

Muted guava moves across the nose as quality carbonation feeds the doughy head, lasting longer than is typical. The mouthfeel was earthy yet light enough to gulp. Dank golden hues illuminated the glass. Aromas opened into notes of early orchard blooms. Returning to the Fold (7.2%) is a single hop IPA originally canned on 06.16.20, I enjoyed mine a few days later. Drink craft beer respectfully.