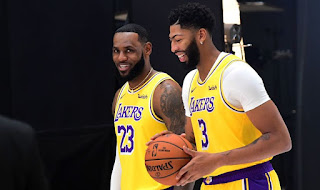 Cool and clear fall days when the rain holds off are the type of autumn days I'm looking for. October brings lit hues to leaves, pumpkins to front porches, and hoops to the hardwood. Only the NBA can truly quench that basketball thirst. Each season brings new hope, new rosters (notably this year) and the opportunity to start anew. With so much change I thought it best to tip the season off with some ABC's...

A. All the Action is west -

There's so much talent out west it's bananas. As many as seven western teams have legit aspirations to make The Finals. Let alone the depth of teams that won't make the playoffs. There's going to be some extremely disappointed teams after the first round of the western playoffs. Hell, after the conference semi's too. Watch the western conference this year, the competition will be crazy. The west is best.

When will the NBA just take the 16 best teams for the playoffs? The east currently has an easier path through the regular season and way too many sub .500 clubs. Rewarding winning teams who respect the regular season and are more equipped for playoffs is in the best interest of the NBA. Ebbs and flows of conference inequality would be remedied forever by taking the 16 best. The NBA shouldn't want sub .500 in the playoffs, especially if other teams are above .500 in a far superior conference. Only in the NBA.

B. Before the Bucks Build statues -

Here's a hot take, the Bucks won't be as good this season when it's onion time. Losing Brogdon hurts. I trust no one on their team in a playoff series other than Giannis, including their head coach. Antetokounmpo is easily the player I'd currently build a team around if given the choice to pick one guy. His skills and personal traits could translate into a limitless ceiling of potential. He's the reigning MVP with room to improve.

Giannis needs to become a better more reliable shooter, as many have pointed out. A serviceable jumper would empower him take more of the open looks offered to him by sagging defenses. Drawing the on-ball defender slightly closer is nightmarish for opposition. A defense can only hope to slow his interior onslaught. His decision making and passing must take a leap as well. Defenses will continue to coagulate around him, while also clogging interior driving lanes, especially with Brogdon gone. My biggest question, who do they trust to hit a truly big shot? Giannis is a mutant-hybrid 1-3-4-Shaq on offense and defense, but he'll need help.

Which brings me to the Bucks roster, yikes. I'm not as sure about Middleton as I once was, he wouldn't sniff being an all-star out west. Also, did you see any of the FIBA games? Then there's Bledsoe, yikes, and George Hill as their primary point guards—yikes. Going all in on the Lopez twins might be fun, but it could be bad. Coach Bud has great regular seasons then fails to adjust enough in playoff situations. This will only intensify when coaching the reigning MVP. Maybe the Bucks make some moves. Or maybe they can just rely on the improvement of their freakish MVP. Or maybe this team resembles his FIBA national team when it's really do or die time. Yikes. I think I'd rather be Philly.

Quick aside: Boston had four players on the team that finished seventh at FIBA, yikes. Brad Stevens will have them playing solid ball, but they're not representing the east.

There is zero continuity for teams to start the regular season. Whether rebooted or retooled, they'll need time to gel. Some teams have new coaching staffs. Other franchises will be transitioning due to players coming back from injury. Many are facing a combination of these factors, a team like the Lakers faces all three. Anyone relying on rookies will need to allow time for their young stars to acclimate. Continuity can be built. Talent and fit can offset continuity, the combination of all three is basketball's most beautiful choreography.

A range of talent reshuffled over the summer beyond the seven all stars who switched jerseys. Duos are back. Trios and quartets may or may not still exist depending on how you view Utah, Philadelphia and Golden State. There's no clear cut favorite. I believe there are nine legitimate teams with a shot at the title, which makes for a more compelling regular season. The NBA could benefit from this after the run the Warriors are currently on and the streak LeBron had. In-season trades and buyouts are highly likely; next summer's free agent pool is not as deep. Names such as Beal, Love and Paul will continue to swirl in rumors. If the lack of continuity causes teams to struggle, GM's will hunt talent. 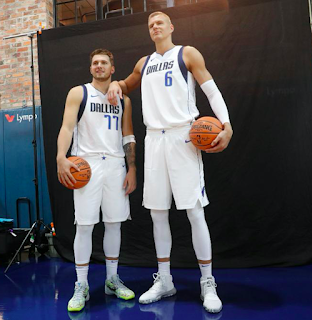 Dallas has two unicorns who might wreck shop this year, deal me in. Last year Luka became one of two rookies ever to put up 21 points, 7 rebound and 6 assists. He did so at 19 against superior competition (Oscar did it in 1960-61). Porzingis looks like a 7'3" Ivan Drago and Lonestar looks svelte. Dallas was smart to bet on Kristaps knowing that Dončić is a budding superstar. Lonestar and The Zinger might just take Dallas to the playoffs. The complimentary pieces look nice and their coach is one of the best, but this comes down to the two unicorns. I for one think these two will come out with something to prove. The unicorns of Dallas have my attention, hopefully the grab yours.

Dray and Steph... If you believe Steph is the best player on earth, his team has to be a contender. If you also believe Draymond to be a top 15 player, then his team has to be a lock for the playoffs. These two guys play on the same team, a team that's appeared in five straight Finals. No one should feel sorry for Golden State regardless of off-season moves, roster flaws, and injuries. They added a young all-star perimeter player in D-Lo and have coach Kerr's prowess to push the right buttons. The Warriors offense may shift a little toward pick and roll action when DeAngelo's running the offense. They also have a shiny new Death Star Center. Trust me, they're fine. No other team can lose an all-world guard (Klay), an all-timer (KD), and still begin the season with three all-stars. They'll be major players no matter what, champions don't die easily. I'm most interested in how opposing teams will guard Steph, and as a result, how well he does individually.

Russell Westbrook and James Harden will make Houston way better. Unleashing Westbrook at times to rest Harden will help long term success. The two most ball dominate guys are complimented by a pretty damn good roster. When it matters most this team could be, as Russ said, "scary, and not for us." Their potential outcomes on offense and defense is infinite. Russ is a big variable, but he always plays extremely hard and a change of scenery might just unlock the next dynamic phase to his game. I'm excited to see the Rockets play when injected with some West-beast.

The rest of the Rockets knows how and what to do. If Russ blends in well, they're a threat for the one seed. I love Russ. I also really like PJ Tucker and Eric Gordon. Toss in Capela if they go big, or Rivers should they go small, and D'Antoni has some tough five man lineups. They also have the most prolific offensive force in the NBA. James Harden will continue to light the world ablaze. He hankers for the accolades only postseason success can bring, good. The Beard's hungry, he'll be looking to cook the competition come spring, and now he's got Russy.

LeBron and AD are going to lay waste. Who starts? Who finishes? Which five man unit is best offensively? Defensively? Can it be one in the same? Who guards other elite point guards? Avery Bradley apparently. Who makes the final roster? Which player will they sign with their exception? Just how good can A.D and LeBron be together? The Lakers have questions. They also have the two best answers, AD and LeBron.

The Trailblazers turn 50. Yesterday I was able to see the newest squad at Fan Fest. The intrasquad scrimmage was held on their new, commemorative floor inside Veterans Memorial Coliseum. Bazemore and Hood looked good, rookie Moses Brown played well too. I'm so hyped for Blazers basketball this year. There are some what-ifs heading into the season. The roster looks dramatically different from last year's team that went to the WCF. Team scoring probably won't be a problem, but what about the D? Youth and acquisitions may fill the void left by Portland losing their two primary wing defenders.


The culture that Dame and the Blazers have created will hopefully influence newcomers. Hassan  Whiteside's physical gifts are impressive, but he's also been seen as a stat chasing malcontent. Bazemore should inject the second unit with a bit more athletic play-making and defensive upside. Nasir Little could provide a spark with his size and athleticism if given a chance. He physically resembles a prototypical wing defender. Vets like Pau Gasol, Anthony Tolliver, or Mario Hezonja may surprise as well.

A handful of guys remain. Collins and Hood should see an increase in minutes and responsibility. Both Collins and Hood have tremendous upside, now they'll be asked to perform at a more consistent level on both sides of the ball. I'm exited to see Simons get more run perhaps too. He's young and athletic with a quick release shot. And when will Nurkić return and to what proficiency? Which leads to the two most important Blazers, Dame and CJ.

Not only is Dame one of the best leaders, he's one of four players to average 25 points and 5 assists over the past four seasons (LeBron, Harden and Curry are the others). CJ and Dame were the second highest scoring back-court in the NBA last season, averaging a combined 46.8 points per game. They're key to Portland's success as primary scoring options. Hopefully Dame and CJ can lead Portland back to the WCF. As the season warms up, Dame's already on fire.