Brew Detective: From Astoria With Love 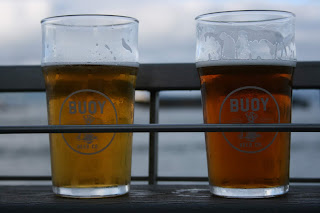 Sitting along the southern bank of the Columbia River delta, looking north at the tree-heavy topography of Washington while nursing a cold one, is how you take in a Saturday sunset. The local co-op fueled us with edible calories as we rediscovered the small shops and boutique hotels. After exploring we ambled toward Buoy for a pint along the water.

Buoy
Enjoying a delicious beer above the waterline outside is the best kept secret at Buoy. M went for a beautifully clear and crushable Cream Ale. Excellent customer service allowed her to test drive before going all in. I elected the single hop IPA which helps support the local animal alliance by donating a dollar per pint. El Dorado IPA's tend to be in my wheel house and this was no different, crisp and clear with a bitterness ever so perfect. This west coast IPA's characteristics are reminiscent of a hop-heavy pale ale. I thoroughly enjoyed the flickering moments of the late afternoon sun as the river's shipping lanes made space for massive container ships. Craft beers with my favorite person on earth kept everything tick tock.

Fort George
Later in the afternoon we went to the top floor of Fort George. The secret's out; Astoria is a dope beer town. We started out with a couple of Germanic inspired offerings. Lager in the Rye had an earthy, grain-like summer feel. The rye aided in the makeup of the body while keeping it crushable. Rye's an adult lager to say the least. Agent M went for the Cathedral Tree, a barrel fermented pilsner. Such creativity added a lot of complexity and a slight murkiness. Glowing with a lantern-like yellow this soft skunky pilsner is sunshine in a pint glass. Considering that we both went for session style ales, I was stoked to pick up on the many differences that the brewers were capable of achieving. Once again customer service was superb. We were offered to try anything multiple times and felt comfortable spurring conversation with questions.

M went for Crysknife, a hazy IPA, with her final choice. The deep golden hue was opaque. Apparently this batch was brewed in collaboration with Mutual Friends Brewing in Denver. My notes included; the smell, down the hatch and all day yo. Every year since opening Fort George crafts an IPA with hops grown by local community members who then donate those hops to the brewery. I was struck by this idea. Why don't more breweries encourage this interaction? Aptly named the Co-Hoperative Fresh IPA. Co-Hop looked and tasted traditional with a unique color sparked by transparency. Agent M's take was in tune with seasonal change, "it's a holiday beer, a winter IPA," she' crafty and cool. The night ended with a delicious cast iron cookie and vanilla bean ice cream. Do yourself a favor and order one of these every time you're at Fort George, you should probably grab a pint to go too. 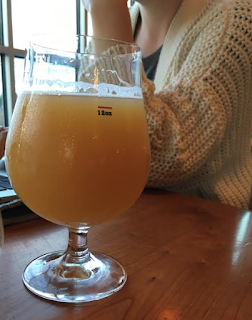 Blue skies, sunshine and the power of the Columbia delta are both true and heavy. The bait has been set, now take the hook. Beautiful late summer days never hurt either. Enjoy craft beer responsibly. From Astoria with love.