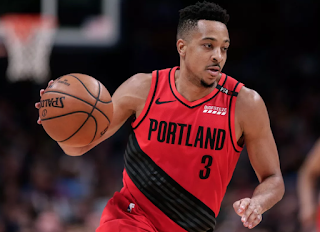 Blazers
Rip City put forth a strong team effort to even their series with Denver. In a night where Dame scored far less than is now expected of him, six Blazers scored in double figures, paced by McCollum's 20 points on 20 shots. CJ did have his mid range, herky-jerky jumpers and floaters going, thank god. He also led the team with six assists. It was indicative of a squad that just wanted to win. The most important stat is not a number, but rather a letter. Every playoff team is trying to avoid an L and Portland just chalked up a big W on the road. Sixteen big wins is what these guys are playing for.

A potential question surrounding the Trailblazers prior to game two may have been, who will help in scoring the ball other than Lillard? Dame's been an almost lock to score 30 and dish 6. Where were the other roughly 70 points going to come from? Well, in a game in which neither team hit a hundred, and the man who wears 0 only scored 14, the other Blazers scored 83. I guess my concerns were squelched. Kanter shooting over 50% helped Portland. Also interesting was the distribution of shots. The Blazers do need to box out with much more tenacity moving forward. Defense ends once you rebound the ball.

Aminu played way better in game two on the offensive end and provided his normal glue guy intangibles. Harkless played limited minutes, he rolled his ankle pretty badly, yet still contributed. Rodney Hood played outstanding on both sides of the ball. He hit big shots that stabilized the second unit with productive and timely scoring. Hood also had a number of memorable defensive moments, including three blocks.

I'll continue to monitor Al and Mo's willingness to take and make more jumpers, especially quick-window threes, where they need to have fast triggers. As the Nuggets load up on Dame and CJ out top in the screen and roll action, it's imperative that the Blazers take advantage of the four on three action once the ball has been kicked, especially if it results in a swing-it three. Also, Dame is a master of the late game drive and kick. His shooting ability opens up the drive, his ability to finish inside causes the defense to collapse, which signals Lillard to pass it to the corner shooters. It happened again last night as it did against OKC. As the defense ratchets up it'll be the more balanced team that perseveres. Portland also has the two best shot makers in the series, which is nice luxury to have as possessions slow down and the shot clock becomes a factor.

Is it fair to think of this match up as the battle to be The People's Champ? I mean, who wants to cheer for those other two teams in the west vying to be the bitchiest. Did you happen to see what Lillard said about pressure? The series is knotted up as it heads back to Portland. Rip City is ready to get lit for their favorite squad. I look forward to Friday night in the Rose Quarter. Jokić and his mile high men lost home court as they now travel to Oregon. Some interesting tidbits to think about while watching a point guard in the body of a not-so-chiseled center. First off, Nikola has more touches than anyone else in the playoffs, wow. Second, he's the assist man on the two top assist duos in the playoffs, as Murray and Harris benefit most from his genius level passing. Did you see him nutmeg Al? I'm also amazed by the plethora of ways in which he scores: off the bounce, at the elbow, catch and shoot, pick and pop, top of the circle threes, show and goes, mid post, low post, etc. He's such an enigma; there's nobody else who plays like him, let alone is built like him. As he ages into his body with a better diet and training regiment, look out. Just not this year Joker.

Harden got got by the refs in game one. Then he got got by an eye rake from Draymond in game two. It's tough being an MVP not named Curry or Durant. What would happen if Steph was taking all of those "landing zone" fouls? Remember, his ankles are aided by the ligaments of cadavers. Quick aside, is anyone else tired of the antics and constant bitching in this series? On the other hand, there's truth to the notion that the Rockets are foul hunting instead of taking shots to make them. Maybe Houston should just try to beat the opponent rather than scheme the analytics. On to the Death Star.

Draymond is no longer fun to watch, even though he's a basketball Swiss Army Knife. He literally goes ballistic on refs like no one else in the league and should get booted from way more games. Iguodala has been the darling of metrics for his defense for quite some time now. I've watched him ample times over the past five years and here's my take. He's been gifted so many non-calls that it boggles the mind. He acts as though he's never fouled anyone, ever, every time he commits a foul. He's such a handsy player who also tends to be more flat-footed than most other "elite" defenders. I'm so over his bickering shrugs and ego-tripping flybys when he miraculously hits a three pointer because he's so wide open he could have had a ham sandwich and a soda to wash it down. He sure doesn't act a fool when he misses his fair share of lunch-break-jumpers. I too wish I could catch lobs from Green once he corrals the ball and dashes toward the lane after some screening action with Steph has left those two defenders orbiting around Curry, while the other two non-action defenders are instructed to stay attached to KD and Klay on the perimeter, leaving Dray and Iggy with a two on one at the rim.

Last but not least, the arrogant nonsense showcased by Curry after his makes and sometimes even when he misses, pisses me off. It's one thing to celebrate a big shot, it's far less classy when showing off so frequently. Just imagine what he would've done had he made a series clinching dagger. Act like you've done it before. Act like the superlative star you are said to be. Because I for one am not a fan. Their collective sportsmanship is nearly nonexistent on the court. Unfortunately, those are not the role modeling antics I want young hoopers to be absorbing. Save your retinas the pain. Down with the Dark Side. 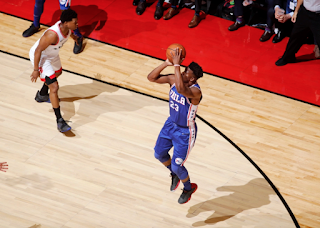 It's Milwaukee's east to lose, unless Boston wins. I think the Bucks playing at their best, is the best of those remaining back east. However they're unproven and their ultimate Grecian weapon is a shaky shooter, which allows the defense to sag tremendously and pack the paint when needed. The other Bucks showed up in game two, hitting a franchise record number of threes in a playoff game. Giannis can be unstoppable at times, yet Horford and the C's do as good a job as any defending him. The Bucks sorely miss the utility that Brogdon once afforded them, both as a creator who can make shots, and as defender. If Milwaukee isn't hitting threes, they're in trouble.

Boston is like a box of chocolates. It's never a good thing when inconsistency is the constant. I was flummoxed by Kyrie's lackluster performance in game two. I'm not sure who has the best player in the series. Is it Kyrie or Giannis? Antetokounmpo is the most complete player on both ends of the floor, but Kyrie's a shot making magician who can also hit game winners when the onion sack is on the butcher block. I truly don't know which team will prevail, no one does, as neither team has grabbed control of the series yet. I expect this to go at least six, if not seven, only time will tell.


Philadelphia and Toronto are Beyond Thunderdome. Kawhi's been the best player in the series, but Philly might have the next three or four best players on the court after Leonard. I love me some Pascal Siakam, but this is the first time he's had to be one of the guys. Siakam lit it up in game one, then the Sixers went back to the lab and made proper adjustments. I'm starting to waver on Lowry, this is just too many years in a row now, his game doesn't seem to translate well in the playoffs. He's still a fierce competitor and a good team defender. Marc Gasol cannot be so unengaged on offense and his defense has been a little less than. Toronto has some inefficiencies to correct.

The Raptors bench was supposed to be an asset, it hasn't looked that way so far. Philly has made some nice adjustments and actually went deeper into their bench surprisingly. The playoffs remind us that extra minutes that went to role players during the regular season, often go to the best players during the second season. With that being said, who is going to help Kawhi stave off the 76ers? Jimmy Buckets has reappeared and his name is not James. The east has my attention.

eightychoices.
Posted by 80choices at 1:15 PM