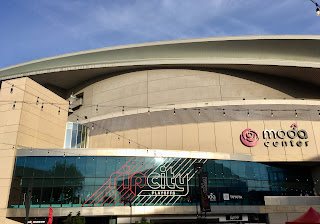 The Finals are taking form as the Dark Side shot down the Rebellion. Golden State making five straight Finals in this era is mind-boggling—the NBA of the 1960's is almost a different sport. Now that we know who's representing the west, and being that the east is lacking LeBron, I now have way more free time to do other things. This is an NBA adios of sorts, well, at least until next season...unless KD re-ups with Golden State.

This Blazers team etched even more love into the hearts of their fans. Thanks Rip City for one hell of a year. Last night I was fortunate enough to attend game four at Moda Center. Agent M came through in the clutch. The energy and intensity were intoxicating. Nothing comes easy in a playoff game, nothing. Basketball is electric at that level.

I have to confess, I've attended game four of the WCF in each of the past two seasons. The game at Oracle last May was cray cray (thank you Bobcat). Last night's overtime thriller was bonkers too. My notes from the game are below.

- Meyers Leonard played out of his gourd, he could not have been more red hot. Speaking of red hot, Bill Walton was at the game gloriously rocking a red tie-dye.

- CJ and Dame played better. It's really fun to watch CJ utilize his craftiness on offense and his conditioning and effort defense. Each possession Klay guarded Dame was a battle.

- The clear path foul was brutal; it swung momentum, totaling five points and cutting the lead from nine to four.

- One of the very few moments of carelessness was a turnover on a set play that led to an easy bucket for Golden State. Whether it was Dame's wishy-washy pass or miscommunication, it hurt.

- Portland took some unnecessary threes as the game got tight. That dunk by Meyers to put Portland up three with two minutes left was dope. If only Dame had hit that running, baby sky-hook at the end of regulation. Damn.

- The Last time Portland led they were up by one thanks to CJ (115-114). Then Steph came down and missed a three. I think McKinnie got the offensive rebound and put-back for two, ultimately putting the Dark Side up for good. Not that any one play decides a game, but if the Trail Blazers rebound that miss, they're up one with the ball and 85 seconds to play; a snap-shot moment they wish they had back. Portland's following possession resulted in a miss. Then Green hit the dagger three. I thought Dame got fouled on the second-to-last play where he drove the ball and was met with contact by Green and Thompson. That's a tough no call at home in an elimination game with 3.3 seconds to play. On the final play Meyers set a screen for CJ to go toward the hoop and then screened for Dame to flair out to the corner for three. Turner inbounded to Dame for the three, the rest is history. (117-119)

Basketball's had my attention since I was a wee little tot rocking J's in '85 before they were a thing. This was a big transitional year for me. I'm thankful for the language that is Basketball. I played pick up games at a training center for ninjas in the Pearl. I rekindled old-school hoops connections while making new friends in Portland's basketball league. During design week I attended a Blazers-centric event that showcased game posters and other kick ass basketball art. I hoop regularly at Matt Dishman Community Center. Irving Park and Peninsula Park almost always have runs when the weather's nice. I was blessed to watch the pros play a handful of times because I live in the same hood and games here are relatively affordable. There were invitations to watch the Blazers at my homies' house with their families. Other times we'd go to Ron Toms where the games were projected off the bar wall as if it was our own basketball living room. Or we'd just cheer from home with some snacks and cold ones. However it was being taken in, hoops was on the menu. 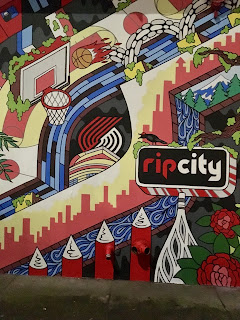 Portland is Rip City because Portland loves the Blazers, and maybe more importantly, we love hoops. The coolest thing about this community is that all walks of life represent Rip City. On the day of, or the day after a game, everyone is rocking Blazers gear. It doesn't matter who we are or what we look like, we all share the Trail Blazers. Thanks Portland. Go Rip City!

eightychoices.
Posted by 80choices at 7:50 PM