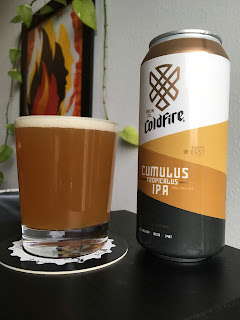 A few years back my partner in crime and I pulled into Eugene, laid out a blanket and took a little nap in one of the many beautiful parks. Literally a block away was ColdFire Brewing, of course we ambled in and had a couple of cold ones, along with some delicious food truck accoutrements. Now living in Oregon I can decide daily as to which delectable local libation I will be consuming.

ColdFire's Cumulus Tropical IPA is another in the growing list of Northwest brews tipping their pint glass to New England style hazy's. The side of the can reads, "This one's cloudy—gently rouse before drinking." For my two cents, it doesn't have nearly the sediment as some of the others in this genre. None-the-less, I gave it a gentle swirl before pouring it into a glass.

My tasting notes are as follows: Pear juice is the dominant scent after cracking the can open. A great doughy head is produced, lingering with lasting legs. There's an almost complete absence of bitterness. Rarely do I taste the malt of a hazy IPA, but it was definitely noticeable in the Cumulus. Look for this fine libation on draft or as a four pack. Enjoy responsibly.