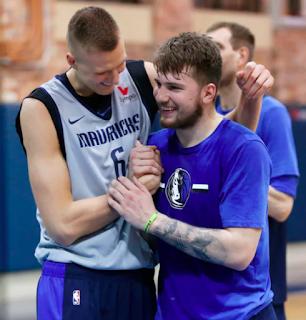 The Unicorn & Luka Lone Star do Dallas |
Dallas made a trade out of nowhere for a Latvian Unicorn, well done Mavericks. Their youth, style of play and limitless upside, feed my imagination. I already find my self cheering for Luka, even if he plays in Dallas. Now he has a 7'3" dead eye shooter who can also defend at the rim. They really are the perfect pairing. The sets Carlisle can orchestrate with these two on offense should be dynamic. This will be fun to watch.

Lebron & La La Land
He missed 17 games after being the fourth seed on Christmas night. The Lakers went 6-11 in his absence. Now he's back, sort of. They won his first game back 123-120 against the Clippers in overtime. (LeBron's line: 40 min. 24 pts. on 9/22 shooting, 14 rbs. 9 ast.) And apparently he was at about 80 percent. Then he sat out against Golden State on February 2nd. Prompting me to believe that a trade is inevitable. Hopefully he didn't re-aggravate his injury.

How bad was he hurt? Did he want to see what this team looked like without him? Did he need to get a prolonged break before making a herculean effort to lead this team into the playoffs? Will he rally these troops? Will the Lakers get help? Will they get a superstar? Does LeBron want AD? Yea, duh. Will he get AD? Chaos is a basketball storm that James can thrive in. We'll have to wait and see if the Lakers can weather it as well.

Rocket Fuel up?
James Harden had 61 at The Garden, he also played outstanding against the Raptors on January 25th. Harden has usurped Giannis as the MVP leader in my opinion. He's first in WARP (PG is #2 -3pts behind!). James is also the first player since Jerry West (1965) to record 600 points, 100 assists and 100 rebounds in a month. The Beard accomplished that feat in January while also averaging 43.6 points/game for the entire month. I hope Capela, his screen and roll partner, regains his high level of play prior to the injury. I say this because, Harden and Capela could put a strain on Golden State when targeting Steph and Boogie in the pick and roll, should they meet in the playoffs. 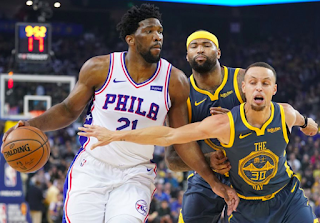 Processing
Joel Embiid is a beast. Most teams do not have an answer for him when he's at his best. The Process  has already amassed 30 points and 10 rebounds 20+ times this season. He's a legit threat to raise his team out of the east. He doesn't get destroyed, he does the destroying.

Danny Green is an advanced stats darling and one hell of a team mate. He was not just a throw in, especially if he stays in Toronto. Danny's a big part of the Raptors success, both with and without Kawhi on the court. Obviously no one knows what Leonard is thinking, but it's probably safe to say that Green knows him best while in Toronto together.

NBA lore is becoming undone. Superstars are available. The player movement since Cleveland somehow did the impossible is outlandish. Take a breath; Durant joined the Death Star, Kyrie went to Boston, so too did Hayward, Butler was traded twice, Paul George went to OKC, Chris Paul to Houston, Blake was shipped to Detroit, Kawhi's in Toronto, Boogie's in The Bay and LA got LeBron, all serious stars. You could also mention Carmelo and Wade, Isaiah Thomas being dealt like a card, the draft day swaps that have led to Luka mania, and now the trade for Kristaps. Any way you slice it, superstars are available. You no longer have to select first in the draft to score Anthony Davis. To say that superstars are rarely available is purely a myth.

Another NBA concern has to be the request of those stars wanting to be moved. Even more harmful may be how players are leveraging this pressure earlier and earlier. What happened to just riding out your contract a la Durant or LeBron? Is it better to get dealt or do the dealing? Can you hurt your team more, or help them, when communicating the disinterested party's concerns? I find this to be an intriguing topic, one with no perfect answer to fit so many scenarios.

WWSD
What would Steph do? What would Steph be, by himself, on a sub .500 team? What would his game look like without Klay, and then KD's, gravitational pull? Without Green's defense and play making proficiencies? With no bench mob of Iggy and Livingston? No Kerr to keep all of their orbits whirring and in sync, and still organic? A team perfectly built to hide any of his flaws and accentuate all of his otherworldly skill—on offense and on defense? The Warriors are too perfect. The NBA is in trouble.

What if he were on Atlanta or Cleveland? What if he was just double teamed on every half court action? What if he was denied all game without the fear-inducing concern of his team in Oakland? How much more would he be exposed on defense? Could he do what James Harden is doing? Could he drag a team to a playoff spot in the east, let alone the west? What if Steph was all by himself like Kemba? Could he do what Dame's done in Portland? Could he elevate Milwaukee to the best record like Giannis has done this year with coach Bud? It's a great what if?

I'm not sure what he looks like as the lone star on an NBA team. I'm just not as sure. His team is the super-est of super teams, Durant made it so. Is he as singularly dominant on a team outside of Golden State? Their collection of selfless and cohesive talent is spectacular. Which is why the Death Star's sights are set on the competition. I suspect it's a foregone conclusion that they win.

Disclaimer: I think Curry is the best shooter of all time, he's alien in skill and talent. This is a thought-piece meant for discussion after attending a Blazers game where Dame didn't play against Atlanta. Portland struggled with the Hawks despite CJ McCollum recording his first triple-double. Steph's missed 11 games this year. When Curry misses games, the Warriors are not desperate like most teams are when their lead star is out. They may look and be different, but come on.

eightychoices.
Posted by 80choices at 6:05 PM