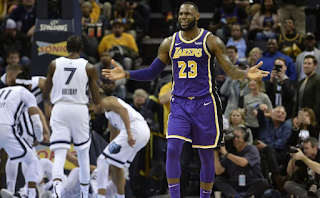 I hate to say it, but LeBron's not making the playoffs. Barring major health concerns to the teams he's chasing, the Kings, Clippers and Spurs; the listless Lakers are not making the postseason based on another terrible showing against Memphis. They continue to lose the games they have to win in order to gain ground in the standings. There was no cohesion and not enough fight shown in their 110-105 loss. LeBron looks good sometimes, but can a triple double that wasn't hunted for be ugly? Ingram and Kuzma cannot continue to be an either or, they both need to produce consistently on offensive and become constant threats. Especially if James is going to be just good.

LeBron's body language is not looking fun. The Lakers are on a one way trip to nowheresville. It doesn't help that their offense is basic and stale. Possibly the result of James, or maybe because everyone is miserable? The same can be said about their nonchalant defense. Being miserable can be tolerated if winning. It's a pair of cement Nikes pulling you down if you're two games below five hundred and four games back in the loss column. The Lakers are now tied with Minnesota for tenth, yikes. As a team they have a negative point differential(-1.4) and are a net negative in fourth quarters this season. Those stats do not reflect a team hungry for the playoffs. With 22 games LA is on the outside looking in.

In losing to the Grizzlies, LeBron became the first player to be in the top ten of assists and points all time. He's fifth in scoring and now tenth in assists, an amazing accomplishment. He would have rather remembered it with a win. Unfortunately for him they lost again, his team mates look disinterested, his front office might be horrible and the easiest part of their schedule after the all star game just went up in flames. I think they're done now. Space Jam can start scheduling if LA loses twice to New Orleans in a span of five days. I just don't think anyone thought it would begin in the spring. Neither did I. Somebody tell Bugs Bunny.

Only in the NBA.