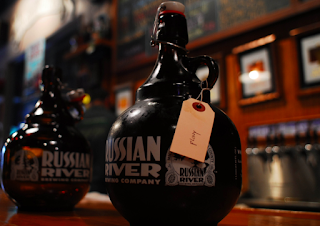 There's one beer in modern American micro brewing that set the DIPA standard. It's continued to be flattered by the ongoing attempts to be imitated. Thankfully I have the ability to indulge in this benchmark IPA, mostly because of who I know and where I live. Oh how I long for the days when no one was at the bar, and there were never any lines to get in. Pliny the Elder changed everything.

Pliny was due for some PUB on eightyhoices. When the Elder cascades into the glass a beautiful head appears. The diligent nose was big and punchy, familiar, reminding me of home. As the foam disappears, a transparent quality shines through the golden and apricot hues. The Elder embraces its clarity. Just before drinking, the aroma oozes with pine and floral zest. Here's an oxymoron for you; it's smooth and bitter. Pliny starts off effortless, then at the back of the palate, the bitterness exacts its hoppy revenge. This beer is for those that want hops, not malt. If you find yourself bellied up to the bar at Russian River don't start here; work your way up, while preserving your taste buds. I recommend beginning with a Row 2 or Blind Pig. You'll impress the servers by being the only tourist not asking for a Pliny. 8%ABV