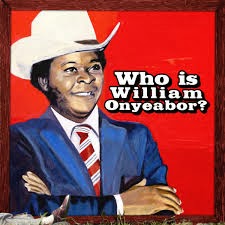 Who is William Onyeabor? He's a Nigerian funk musician who's mysterious, under-valued and way ahead of his time. His music has seen an increase in interest, stemming from a compilation album released last year titled, Who is William Onyeabor? His strange manipulation of the synthesizer was a signal for the electronic music scene to take its cues from. Unknown is an understatement when trying to describe the man or his music. Throughout the 1970's and 80's he curated his sound, his way, unsullied and purely original. Between 1977 and 1985 he self-released eight albums that can only be measured in funkiness and eccentricity.

Needless to say his art spurs many questions. How did he get the equipment? Was he the only one on the continent of Africa, let alone Nigeria, to have produced such music at that time? How was he so far ahead of the European and American music industries? Why didn't he continue to pump out mind-bending music? Back in the day he had not yet gained fame and fortune. Later on he become a born-again christian, choosing to never again speak of himself or his music. He was a trend setter from Enugu who would influence the developed world's music. There may not be an EDM scene without the likes of William. He chartered a new course, his own, that will continually inspire our future musicians. One can only hope that others will realize that their art is what speaks to the world.

eightychoices.
Posted by 80choices at 7:57 PM