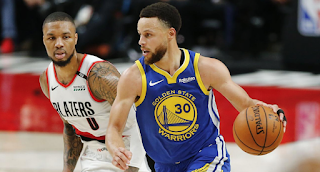 It must be nice to lose a two-time Finals MVP and not skip a beat. If Durant is going to sit out the entirety of this series, force someone other than Curry to score 30+ points. Portland unfortunately let the last two games slip away after big leads were snatched back by the Dark Side. The second and third games of the Western Conference Finals epitomized the tales of two halves.

I want the Blazers to show some more fire. Draymond's a total spaz who's always yapping and acting a fool, he also apparently never fouls anyone (Iggy too for that matter), but he does come to play. It pains me to say, but Green was the best player on the court in game three. He pushed pace, anchored their defense below the three point line, made the right reads, and simply put, played harder and with more passion. His rebounds that lead to him running the break were demoralizing. He wanted it and attacked. He was as Kerr put it, "a wrecking ball." 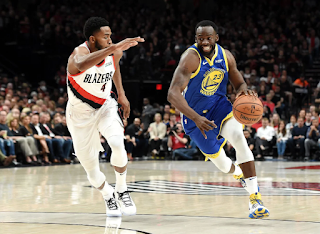 When Quinn Cook, Jordan Bell and Jonas Jerebko make an impact, especially in the WCF, it fries the opposition. This was all happening sans KD and without Iggy playing in the second half. It's probably too late, but Rip City should to do to Steph, what Golden State is doing to Dame. Portland needs to have a diligent defender stay attached to Curry's hip at all times. When Steph doesn't have the ball they need to fully deny him. If Steph does come off of ball screen action, blow it up and double him hard. Make him pass it to the screener or elsewhere. How many times has the basketball world seen this story over the past five seasons?

On offense the Trail Blazers may try playing Lillard off ball, again similar to what Golden State does with Steph at times. If Dame's man is going to be glued to him, run Lillard off some non-ball action to try and free him up, or to get a favorable match up. One thing's for sure, the high ball screen action is not working for Dame, or for the Blazers in general. If Portland continues to play that way the screener should slip more often to shake things up. Portland's best lineup during game three was probably their third quarter quintet of CJ, Mo Harkless, Lil Curry, E.T. and Meyers. I'd like to see more cutting action from the Blazers, especially from Dame and CJ. Let Turner or Lil Curry initiate some of the offense, that way Portland can try and counter some of Golden State's over-aggressive defense on the perimeter.

Another thing, when Portland's playing with the lead, they need to act like they have the lead. There's no need to hoist a deep three when you're up. The Blazers need to get back to their unselfish play and work the ball side to side or inside out. The half court possessions in which the Trail Blazers make less than two passes rarely result in a quality shot, regardless of the outcome. Move the ball and move your bodies.

Not only has Dame struggled on offense, he's dying on screens when defending on the  perimeter. He cannot be a zero on defense, especially when he's turning the ball over. I love Dame, but this is gut check time with a win-or-go-home game four looming. For granted his ribs are jacked, but he's got to get back to that laser focus in order to overcome the greatest of hurdles. 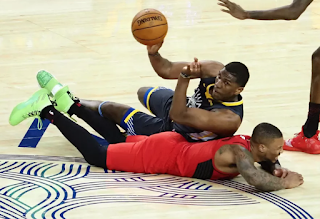 At the start of the series it was no secret that the Blazers had to do all the little things in order to have a chance. And even though Portland looked damn good in the first half of games two and three, one issue has irked me; their lack of physically boxing out. I realize that the rebounding numbers are going to be skewed due to Portland's poor shooting percentage, but defensive rebounding is crucial against the Dark Side. You cannot give them extra chances after they initially miss, it's back breaking. Golden State tends to capitalize on those chaotic extra chances following an offensive rebound or broken play. My notes have a repeated message, BOX OUT.

No team has ever come back from an 0-3 deficit, and yet, I still want the Rip City Rebellion to fight for their first WCF win in almost two decades. Let's go Blazers, I want to keep watching Portland basketball. I don't want this team to get swept. Hell, I don't want no gentlemen's sweep either. The Trail Blazers have been outgunned thus far. Perhaps too much underdog energy has crept into the series. Who cares about odds, or Death Stars, or Mike Breen's over-the-top favoritism. F all that S. Let's start with one victory and go from there. I'll keep believing, hopefully the Blazers locker room believes too. Only in the NBA.