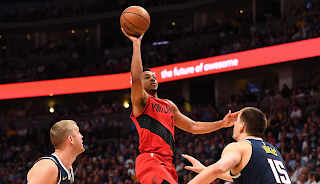 The conference finals have descended upon the cities whose teams are still in the hunt. Now NBA fans get almost science fiction-like match-ups. A comic book battle will be waged in the East thanks to Giannis and Kawhi's freakish talents. The West resembles an intergalactic struggle as the Rip City Rebellion takes on The Dark Side. Thanks to CJ the rebellious three seed advanced. I'm hyped for the Western Conference Finals. Tuesday's ping pong balls also create some nice pregame window dressing.

Game 7's
Welcome to the Hood, northeast Portland to be more specific. Rip City was feeling good Sunday afternoon as the Trail Blazers weathered game seven at altitude. CJ was blazing Nuggets with his silky jumper and delectable mid-range game. He racked up 37 points in a 100-96 victory. His hustle to perfectly time a LeBron-like block definitely kept the momentum in Portland's favor. Dame went 3 for 17 from the field and the Blazers still found a way to win. Rodney Hood's emergence has been fun to cheer for. I wish him a speedy recovery, the Blazers will presumably need him (or E.T. phones home). Who else wants some more Zach Collins? I'm loving ZC's energy, effort and acumen. And big ups to Kanter for adhering to his faith-based fast while still doing the in-game dirty work with one shoulder. Rip City Rebellion reporting for duty.

Portland embodies selflessness and togetherness, almost something more than team. A common thread weaves through the entire squad. Their shared and collective journey has brought them to this opportunity, no matter how daunting. Each Blazer exudes that willingness to want it for the next guy. Their team play and leadership exemplifies this ethos. Learned or intrinsic, the magic and mentality of their unity disseminates belief. Don't listen to the naysayers, just believe and remain together.

Belief is needed for camaraderie, camaraderie builds into rebellion, and rebellions face off against brutal opposition—Rip City brings hope. Hope and belief can be powerful weapons. Some laser beam accurate jumpers and Wookiee-like interior rebounding would help the Rebellion as well. The Dark Side has reigned for too long. Rise up Rip City Rebellion and cast down the evil empire. Every sound minded NBA fan in the galaxy should be pulling for the Trail Blazers. To quote the American philosopher Flavor Flav, "This is a call to all you sleep'n souls, wake up! Take control of your own cipher, and be on the lookout for those spirit snipers, try'n to steal your life." Down with the Dark Side. Go Rip City Rebellion!

North of the border Toronto and Philadelphia took game seven down to the wire. Kawhi put on his cape and saved the day with his plink, plink, plink, Plinko-like buzzer beater. For those unaware, Leonard's a two-way monster. He's set the bar during these playoffs with his performance. More on that later. Everyone of his 41 points was needed. Toronto only scored 92 and won by two. Again, he's a beast. Both coaches played seven guys with Philly's starters stacking serious time (I don't count Monroe playing two minutes). In a game that was so distilled, the team with the best player won.

Avengers will assemble in Milwaukee as Giannis and Kawhi clash for supremacy in the east. They're probably the two best, two-way players remaining in the playoffs. Sorry KD, your team is too good. More on that later. It's a coin flip to say who's better, Kawhi or Giannis? This series will showcase their otherworldly talents, as well as something less talked about, their tenacity. It's no wonder these two guys are perhaps the best in the league. They don't seem to share the AAU, buddy buddy bullshit, or self delusional grandeur that infects the Association. I think this is Milwaukee's series. I trust their players and system more than I trust Toronto's. This will be a Clash of the Titans. Here's to hoping their assignment is to guard each other more often than not. Release the Krakens.

More On That Later
In the above paragraphs I typed, more on that later, a couple of times. Later is now. Here's a quick dish on who I think has been the best of the best during these playoffs. A top five shall suffice.

1. Kawhi Leonard: He's a two-way monster who can shut down the other teams best perimeter player and still get you 30. He's also clutch and has the demeanor of a poker player that not even James Bond could get a read on. Feel free to take any other player listed below and ask yourself, is that guy gonna take this Toronto team as far as Kawhi can? I think not, but Durant probably comes closest. Leonard is doing the most with the least around him. Did you see Toronto playing game 7 hot potato?

2. Giannis Antetokounmpo: He's your likely MVP of the regular season and he might be more athletic than, dare I say, peak LeBron. He annihilates opponents without a great jump shot, although he takes them at the right times to keep the defense honest. Not only is he gifted, but damn if his attitude isn't all seek and destroy-like too. There's nothing not to love about this guy. His path to the NBA is unique. Unlike the trajectory of many top American hoopers who get coddled, spoiled and insulated via AAU circuits, sneaker companies and DI shenanigans, Giannis knows only one team, the Bucks. His loyalty is to the game.

3. Kevin Durant: The most gifted scorer in the NBA and an OG unicorn. A seven foot perimeter player who can pretty much do everything. Just not on his own. It's unfair, I know, but so is his team. That's why I have him third. He's not doing it by himself. I get it, no one really does it by themselves. But come on, who else has a 6x all-star, 2x MVP, point guard, who happens to be the greatest shooter ever? Who gets a 3x all-star, 2x all-NBA, do-everything, defensive player of the year as their fellow forward? Does anyone else have a 5x all-star, 3x all-NBA, shooting guard with the record for most points in a quarter, who also happens to be an all-time shooter? Which other team has two different Finals MVPs? You get my point. No other superstar in the NBA is flanked by such a collection of elite talent, it makes the game so much easier. The most bizarre thing is, they probably need him more than he needs them. Boo Death Star.

4. Damian Lillard: First thing's first, he's an awesome human. Second, he might be the best leader in the NBA. He loves his team like family, believes in team first play and is unselfish. His game is too legit to quit. His range seems infinite, hello logo. His handles are mad. He's got the quicks to get to the rim and finish. His nerves are that of a steely ninja assassin. He's Dame Dolla, the best MC in the Association and it ain't even close. He doesn't show off, he shows up. He's from Oakland and loves Portland. More importantly, he ain't scurred. In the battle for good versus evil, it's Dame Time.

5. Nikola Jokić: He put himself on the map if he hadn't already. His body double never showed up and he just kept showing out. He plays center and point guard. There is absolutely nobody else like him in the NBA. He racked up playoff triple-doubles at a rate that put him in the company of Magic Johnson and LeBron James. Nuff said. Nice work. Maybe next time tiger.

In a Galaxy Not Far Away...
Both conference finals resemble science fiction. In our reality the Marvel Universe has infiltrated the eastern conference. A hardwood war will be waged as a Greek Freak confronts the quiet claw of a Finals MVP. Their end game, the NBA Finals. The Star War out west carries galactic ramifications as the Rip City Rebellion takes on the Death Star. Hopefully there's a round ball equivalent to a thermal exhaust port. That way the Trail Blazers can target in on it with their proton torpedoes. I'm all in on the Rebellion. Go Rip City!

eightychoices.
Posted by 80choices at 2:00 PM