NBA All Star weekend has come and gone, and with it, some post-trade deadline laundry was aired out (Anthony Davis needs to be more tactful for his own sake and more mindful of the worker employer dynamic). I thought Diallo's repertoire of dunks were awesome. The three point shootout continues to be the best event, perhaps of the entire weekend. Who knew Joe Harris would take down the elder Curry? Then came the actual game in which Team LeBron fought back to win. The third quarter push with Dame and Klay was fun to watch. The fourth quarter was pretty good too, especially that final lineup of Bron, Kyrie, Harden, Dame and KD. Yikes! The only way that five didn't score was if they missed. Durant lead his team in scoring and was awarded his second All Star MVP. There were subplots for the rumor mill as well, the Kyrie KD whispers make me smile.

As the Association gears up for the last third or so of the season, I wanted to touch on a few topics before games begin again after the break. Below are some hoop thoughts bouncing in my mind.

Eastern Conference
The East is a top heavy foursome, sorry Pacers. Watching how the top seeds in the east shuffle into the playoffs is the second most fascinating storyline as the regular season winds down. More on the most fascinating in a bit. Two to three of these teams will go into the off season supremely disappointed. Their reward for the blood bath battle that will be the second round in the East, and then the ECF. Trying to predict which teams will enter the off season licking unsolved wounds, is anybodies guess. There will be some who will immediately try and rearm themselves, hey Danny Ainge! Either way, it's probably safe to assume that these teams will look different come next year. Maybe even the team that does make The Finals will reshape their roster depending on how their mission went to upset the Death Star. All scenarios are possible.

What is known, is that teams are going for it, just look at the trades made before the deadline. Certain trades in particular reflect the gravity of the post-LeBron era in the Eastern Conference: Gasol to Toronto, Mirotic to Milwaukee and Harris to Philadelphia. The tea leaves tell me that all four teams believe it's possible for them to make The Finals. I'll say this, I wouldn't be surprised by any combination of Philly, Boston, Toronto or Milwaukee in the ECF. I personally believe that the Celtics or Sixers are the only two who could give the Death Star something to worry about.

RIP CITY
The Trailblazers are a dark horse threat to take down the Death Star. Rip City and OKC are the two teams out west I think can add some intrigue to the playoffs. It's time the Blazers got some more ink, or at least some more keystrokes. Dame gives the guards in Oakland trouble, he's like Kyrie in that fashion. He has no fear and is a threat from anywhere on the court to score. Al-Farouq Aminu plays hard and will make Durant work. Collins, Layman, Hood and Harkless all have different abilities offensively, and yet they possess enough size and athleticism to compete on defense as well. Plus they all kind of play with an attitude that could give two shits about the all time greatest team from the Bay. Nurkic can at least bang on Boogie and do some high screen and roll, making Cousins work on defense is ideal. Mix in some serious CJ playing out of his gourd, and we could have some drama in the west. There's no easy way to upend the champs, but teams with heart, chemistry and a known system stand a better chance than most. Rip City believes in Rip City. 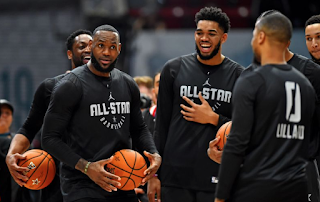 LA LA LAnd
The NBA hasn't had a playoffs without LeBron since 2005. Think about that. Other than his first two years, he's always made the tournament. That's 13 straight years not counting this Lakers pursuit. Each time he's advanced to the second round at minimum. Nine of his 16 years has seen him competing in The Finals. Whether or not LeBron can get these Lakers into the playoffs, is now the most fascinating story in the NBA. Nothing else is as remotely interesting as how the Lakers regular season unfolds.

LeBron and the Lakers have 25 games to right a shit ton of wrongs. Not only will he have to play at an MVP level, he may have to broker a peace deal. A negotiation that may, or may not, go over so well with those who were named in the trade. He will then have to motivate this same group as well. It sounds like a lot, because it is. This is the Western Conference, the path he chose. I have faith in him, he's overcome incredible obstacles before, but this one's pretty sticky. There may be a reason the saying is, go west young man. Until proven otherwise, I'll stick with LeBron. Besides, as much as I love Fox and what the Kings are doing in Sacramento, LeBron's capable of catching them and the Clippers. Whether or not he will is the million dollar question. If he can pull them to the seven spot in order to avoid the Dark Side in the first round, that would be herculean. Or maybe it's LeBron-like.

Luka Lone Star
Luka did Houston. His tour continues. The Force is strong in him. Only in the NBA.