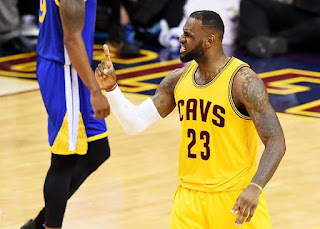 After an abundance of NBA jargon I've made it to the predictions. The Association has seen a lot of shakeup across many rosters. Western teams will likely need to surpass the .500 mark to make the playoffs. It appears to be another year in which LeBron's team looks like the favorite in the east. Has the gap shrunk since the trade? Will we get a forth helping of the same Finals? Personally, I want to see anyone but the death stars come out of west. Below are my predictions for the season standings in the NBA. I'll revisit these selections around the all star break. Basketball will soon be served.
East
You could easily make a case that the Wizards or Celtics will claim the top eastern seed. Cleveland's lessened by the loss of Kyrie, and D.C. has the most continuity of the top teams, but the Cavs play in perhaps the weakest division in the NBA. Who's going to give them run other than Milwaukee? We're likely to see a highly motivated LeBron this year, of course he's motivated every year. I gave SVG some love and threw Detroit in the eighth seed. In my opinion, it doesn't really matter after the Raptors, though Charlotte plays hard and is well coached. If my predictions pan out and chalk prevails, basketball fans would be getting the best possible match ups in round two. LeBron versus Giannis and Celtics Wizards, with Kyrie and Wall going at it; which could pave the way for an Eastern Conference Finals where the Cavaliers would play either Washington or Boston—yes please.

West
There's an obvious imbalance of talent in the Western Conference. You could field an all star team from my predicted top eight teams, while still excluding Anthony Davis, Boogie Cousins, Damian Lillard, CJ McCollum, Mike Conley, Marc Gasol, Devin Booker and a slough of youngsters who may impress. The real question however is, will any of those teams truly challenge the champs out west? Personally I'd enjoy watching the rebel Clippers take aim at the death stars in round one. I've clearly allowed my mind to wonder, having made some bold predictions on a previous NBA post. How insane would a reactor core death blow be from a CP3-less Clippers? The contrast in styles between the reloaded Rockets offense, and say, the sure-to-be stifling defense of the Jazz sounds nice too. Watching Westbrook, Paul George and Melo in the playoffs together will be tantalizing. I'm hoping for an updated OKC Houston second round rematch. A first round battle between the Spurs and Timberwolves would pit the established against the hungry in a four five tilt. The varsity conference  has so many good teams, full of fascinating story lines, only time will tell.

For earlier NBA roundup click here. For five teams you should be watching, click here. Seasons change, as does the NBA, consume at your own risk. The NBA is fantastic.

eightychoices.
Posted by 80choices at 8:18 AM