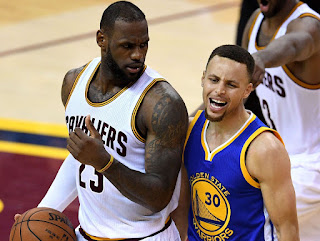 Trying to consume the endlessness of the NBA is impossible, unless you're a cyborg. Melo's in OKC and Wade went to Cleveland, Sam Presti's a bold GM, while the Cavs got a lot deeper. For those who check in, I'm making some personal predictions that I think are bold, as related to the upcoming NBA season.

In case you're wondering how bold these predictions will be, I'm going with the fourth definition of bold: beyond the usual limits of conventional thought or action; imaginative. Now that you know where I'm coming from, feel free to use, or abuse, any of these takes. Here goes...


The Clippers will be better without CP3
OK, maybe not in the regular season, if Blake were to miss too many games, but in the playoffs. What does that mean actually? Do they make the conference finals? Probably not. So are they better? I say yes, and definitely in the long term. I wouldn't want to pay an undersized point guard 200+ million dollars when he's in his mid to late thirty's. A breath of fresh air in Clipper land sounds good. No more angry point guard, in his place is Patrick Beverley, a defense-first hustle guy who competes hard. They also brought in Miloš Teodosić, a Serbian wizard with the ball, giving Doc Rivers two quality guards at the point. It'll be interesting to see how much run Griffin gets as a point-forward hybrid once he's on court. Gallinari could be the wing player who creates space that they've always needed, assuming he can stay on the floor. Lou Williams is a better version of Crawford off the bench and scouting the youthful talents of Sam Dekker and Montrezl Harrell is a worthy experiment as well. Let's see what these new look Clips can do. A Clippers Death Star match up in the first round would be awesome. And, wouldn't it be otherworldly if Lob City flew an X-wing into the reactor core of the Death Star without CP3? You heard it here first...

Two new teams make the playoffs in the west:
The Wolves and the Nuggets appear to be ready. Not bold enough? Holy shit, the Lonzo-led Lakers are making the playoffs, his dad's a prophet, transforming the LeBron whispers into sound barrier breaking screams. Just kidding. I think the Blazers, Clippers and Jazz will fight for the final two playoff spots. Unless my bold Clippers prediction totally backfires. I still believe in the Jazz too. Utah plays defense at a high level, has a really good coach and has some guys who could prove they're able to fill the void Hayward created by leaving in free agency. Perhaps Utah staying relevant in the west is also bold. Sorry Blazers fans. The Wolves roster looks too good to falter over 82 games. The Nuggets play phenomenal on offense and signed Millsap over the summer, so they're going to improve upon last year's uptick. It remains to be seen if Minnesota and the Nuggets can prove worthy of the playoffs in the west, but I'll go ahead and say it, they're both a lock.

2 to 4 more all-stars will be dealt by the trade deadline:
If Memphis fails to compete as they transition out of the grit and grind era, their stars could become attainable. Let's pretend Thomas is not fully healthy for the Cavs, which would be terribly sad, and the Grizzlies look slow and old in the west. Conley could then become the best guard available at the deadline. Say, Love and Frye for Mike Conley and Andrew Harrison. The Grizzlies would shed one year and $6 million per, by swapping Conley's contract for Love's, plus they'd get another almost $7.5 million off their books next year with Frye's expiring. Maybe Conley does more than the off-season moves did to help shift the narrative of this being LeBron's final year under contract. Wade helps to some degree, but let's be honest, it's a one year deal. This would help Memphis to move away from their biggest contracts, accelerating a reboot. If Conley were to be dealt, they could then shop Gasol too. I know, pretty bold huh?

Here's another bold one, what if the Cavs could then snare Anthony Davis away from the Pelicans? This would surely encourage LeBron to stay. That deal would only hit the trade machine if the Pelicans look like a rubble pile to start the season. Imagine that smoldering trash heap scenario, with no direction in sight, with the added fear that Davis will soon want to leave. Cleveland calls and offers Tristan Thompson and Iman Shumpert, their recently acquired first and second round drafts picks from Boston, plus a future pick in return for Davis and Jordan Crawford. The Pelicans could build around Holiday and Boogie, or trade Cousins for more pieces and picks, deciding instead to just blow it up.

The more fun scenario is thinking about a five man lineup that would include LeBron, AD, Conley, Crowder and JR Smith (Korver could step in and create even more space or Wade could play the role of Ginóbili 2.0). Those five man groups could be scary on both ends of the floor. Cleveland would get some cost-effective youth with Harrison (6'6") and Crawford (6'5"), maybe they could develop into versatile wing defenders...or maybe this is all too ridiculous. Or, maybe this does happen. Or maybe, Isaiah Thomas comes back healthy? This would however, be a bold move were the Cavs able to make it happen. LeBron would probably stay knowing he had Davis and Conley, especially if they recapture the title. Hell, if they were to pull this off, Conley and AD combined, keeps them at the top of the east for the foreseeable future. Please let this happen, because this type of shit happens in just one place, only in the N B A!

My final NBA offering prior to opening night will be a forecast of the season standings. For past ramblings on Five Teams to Watch, click here. For the NBA Preview, click here. As always, thanks.

eightychoices.
Posted by 80choices at 8:27 AM