i'm so stoked for the start of a new, full season of nba hoops. the wizards will be in cleveland to tip things off against the cavs tonight at 7:00pm eastern. this will be our first glance at uncle drew's new back court mate and syracuse product, dion waiters. one thing's for sure, kyrie's a baller, he gets buckets. apologies go out to those of you waiting for a less main stream post - it'll happen...

kyrie irving is already a top flight talent, this year he's trying to make a push for the playoffs and probably an all-star game. he's a joy to watch and an ultra competitive gamer who's one of my favorite young players. can you imagine a first round match up in which the heat and cavs meet in a 1 vs. 8?

in miami, the heat play the celtics in a rematch of last years eastern conference finals. it might also be the most sub plot heavy game in recent memory. lebron is now on a mission to ascend into the all time greatest debate, the heat are looking to repeat, wade is presumably back to form after some off season knee rehabbing, ray allen is now on the heat, KG and the truth are pissed, codename rondo hates ray allen, the celtics retooled for one more shot at a title, which is sure to run through miami and we get to see all of this play out on a night where the heat will be given their championship rings. i'm pretty sure most of the celtics won't be on the floor for that. this is almost too much for me to handle, damn i love the male version of a soap opera aka the NBA. this is can't miss tv. the game starts at 8:00pm eastern on tnt. 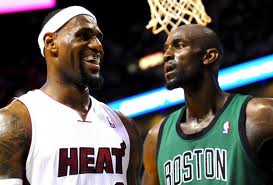 the final game of the night belongs to los angelos, where the lakers host dallas. it's no secret that i despise the lakers. also high on my never rooting for them list are the mavericks. really the reason to tune in for this one is to see if the newest super team can mesh. regardless of kobe being a game time decision and dirk sitting out, i want a sneak peak at the nash, howard, gasol experiment. ahhh i hate the lakers, why nash, why? this game get underway at 10:30 eastern on tnt. the association returns.