maybe all we need is A Shot In the Arm... 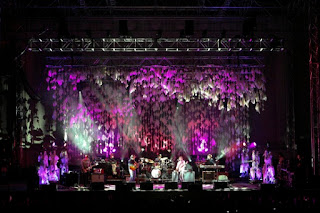 wilco performed last saturday night at the greek theatre (9/22) and proved that they are some of the premier craftsmen of music, both in artistry and professionalism. as with most of this tour, wilco blasted through an inflated first set, aka the mega set, deploying nineteen songs from throughout their catalog. the encore spawned another eight tracks. this two (plus) hour platform allowed them to establish their newest effort, the whole love, while pleasing the listeners with past gems as well. there were some replicated songs during this performance however. normally i'm disappointed in a band playing the same song in back to back shows and eight songs is pushing it, especially when they have such a deep chest of treasures. aside from the mini rant, i was glad to get: i might, the whole love, i'm the man who loves you and a shot in the arm, even if they were doubled up.

wilco has an inner knack for honoring each song amidst exploratory sounds and individual personalities. this means-to-an-end is always beginning, then changing. in the first set i remember misunderstood being incredibly thoughtful and melodically undone. tweedy's voice was captivating listeners in the current of layered sounds his band mates conjured. jesus, etc. is such a treat to hear live. this track epitomizes the melding of lyrics to music in a way that recognizes observations and relationships. the line, "you were right about the stars, each one is a setting sun" only helps to create visions of something that seems revelatory yet we've all shared in.

jesus instigated a steady stream of rousing music. a highlighted quartet of songs started with whole love. this title track carried its anthem-like pulse directly into a candid bit of banter. tweedy commented, "we should've played this one last night." a reference to earlier antics where he compared the two nights.

"...wind must be blowing out. i don't smell nearly as much mary-ja-wanna. that's good for me. i'm still high from last night." 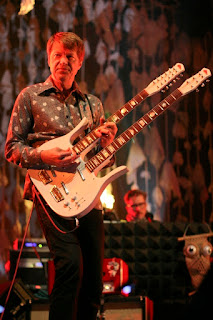 this made for the transition into i must be high, a classic tale of letting go. next came more chit-chat followed by the piano roll of walken, which has a definite cadence and is a favorite of mine. nels cline totally dismantled it with his hollow, sliding riffs on this cool night. he's a machine. the entire band is unfairly awesome. next came the squall and crash of i'm the man who loves you! this one i wanted to hear for selfish reasons, it makes me think of my life, attached to the journey of partnership.

the love vibe kept pace with, dawned on me, a good tune with lyrical wit. then it got all rock n roll. for reasons too long winded, a shot in the arm simply rocked. it seemed to liven the crowd with the energy of what rock music is supposed to feel like. six days later its energy was still clinging to me. commuting on her bike, my wife said this was the song in her head. without question it was a great tune to segue the set closer, on and on and on, another testament to love and its battles.

the encore started with a straight-up missile of potency. via chicago steals all the air out of its surroundings. how it blends its poetic tale with seamless tone before it becomes a beautiful contradiction of its words and experimental noise-rock, is untouchably unique to wilco. the voice does upend the indulgence of sound if you care to care. i do. it was serious heat.

two songs later, the political season and perhaps the environment they were performing in elicited the woody guthrie penned, christ for president. it seemed too right not to oblige this politically holy comedy. another two songs passed and we found ourselves face to face with kicking television. abrasive as this cascading rocker is, it's hurricane of kicking ass wins you over. sometimes you need to  raise a raucous and be done with it. they closed it down with a saloon style dreamer in my dreams. the night felt good, the band was hot, the setting was just right and we were getting after it with friends. 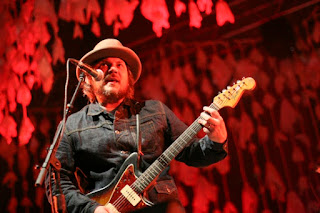 "i said it last night, i'll say it again tonight, best rock audiences in the world. right here... but you guys invented it, you invented rock concerts. and we appreciate that, we thank you for that. it's like deep cuts, no problem, we're with ya buddy. ya make bands feel good. and a lot of the bands don't deserve to feel good. that's their problem, not yours."
- jeff tweedy

it's that mindfulness that helps me connect to his words and stay honest to being perceptive. thanks to all of the great fans in the bay area, across the globe and the bands that bring out the best in all of us!