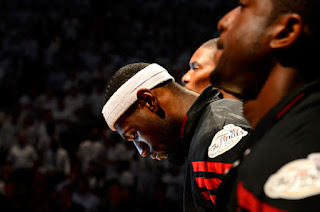 bron bron gets his ring, messes around to notch a triple double in the finals' clincher & shows us an incredible smile that only the NBA championship can deliver. way to silence the haters, albeit temporarily.
en route to becoming the finals MVP, not only did he stymie the 3 time scoring champion (love durant too) while guarding positions 1-5 & playing focused team ball at a beast mode level, he shredded the finals to the tune of 28.6 points, 10.2 rebounds & 7.4 assists. as far as performances go, this has few rivals. jordan in '97 comes closest with averages of 32, 7 & 6 (and MJ is the greatest). he became just the third player ever to lead his team in points, rebounds & assists during the finals. the other two who have accomplished this feat go by the names of magic & duncan (two of the five or ten greatest ever). quite the showing considering the microscope of unfair scrutiny that james is constantly under. mad props to the best all around player on hardwood.
shaggy 3 pop, aka mike miller, went off in game 5 connecting on 7 treys. prior to shaggy, there was the other former grizzlies forward, shane battier, putting his fingerprints on games. then there's mario chalmers, who may have become the heat's 4th man (kinda like rondo in '08). of course there's wade, one of the fiercest competitors in hoops, acknowledging the fact that it took "sacrifices" to accomplish their goal. that same sentiment of sacrifice came up a lot in post game interviews (love wade's mint slacks). and who can forget bosh-a-saurus-rex? he definitely showed us his value. way to go heat. i'm especially happy for lebron, he's both the gift & the gifted & such a joy to watch. we have all been witnesses, now we may be in wonderment. he's only 27, so there's most likely more to come. the association is in good hands right now. 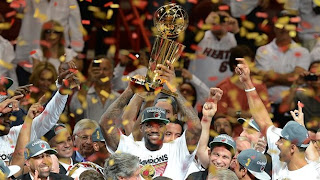 as an avid nba fan i can only hope that the zombies, aka the thunder, will learn from this setback as other aspiring champions have. i trust that they will improve during the off season, as all of them appear to be dedicated gym rats. this explosive & relentless group of personalities seem utterly devoted to the concept of team. they're too good & youth is on their side, potent ingredients when trying to conjure something special in sports. westbrook (aka westbeast & one of my three favorite players to watch), harden (who needs a contract) & durant (a real baller, who gets buckets) have some seriously absurd game. add to the mix ibaka "i block ya", sefolosha & perkins and you begin to realize why this team is not going away any time soon. they'll be back & i'll be rooting for them.
i get the feeling that this heat/thunder match up has the potential to be celtics/lakers version 2.0! although this battle between two extremely skilled & athletic teams finished in 5, it was a joy to watch. i was genuinely excited for each game day. thanks to oklahoma city & miami for making it a hard fought series showcasing amazing talent. these were the two best teams, apologies san antonio & this was the match up i wanted to see. in case you weren't paying attention, they didn't disappoint. hopefully we get to see these two teams duking it out for the championship again. i wouldn't be surprised.

adios en bee ah, i'll catch you on the flip side.