Wilco live at the Fox 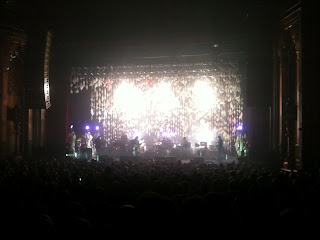 Wilco was amazing. they were simply on point in every facet of the show. the Fox theatre was beautiful as always and the band was smoking! i couldn't have asked for a better sample from their amazing library of tracks. the stage was both ghostlike & technologically comfortable. i really dug the lighting, it was in & on the the tied cloth that hung over their cacophony of sound & intrigue. they have once again distanced them selves from the rest of modern american music. Here's a quick taste of the show.
setlist:
Poor Places, Art of Almost, I Might*, Muzzle of Bees*, Via Chicago*, Kid Smoke (slightly rearranged), One Wing, How to Fight Loneliness, Born Alone, California Stars*, Impossible Germany, Whole Love*, Pot Kettle Black*, Hate It Here*, Theologians, Can't Stand It, Heavy Metal Drummer, Dawned On Me, Hummingbird
encore:
Shot In the Arm, Wilco (the song), Passenger Side*, Kingpin*, Monday, Outta Mind (Outta Sight)*, Casino Queen*, Hoodoo Voodoo
some observations worth noting; i loved that Tweedy wore a hat throughout the night. it reminded me of the singer/song writers from yester year. Jeff's banter was top notch for this show, as it often times can be. he mentioned how the set was created once the band had absorbed the aesthetic of the theater, "we're going to play our beautiful tracks & then, when we're ready, we'll rock." they certainly did just that! i encourage everyone who loves live music to see this show. i know it's early in the year but this may end up being the best tour of 2012. if you do catch a Wilco show, peep their merch, it's rad. those songs with an * are personal favorites that absolutely shredded.
~eightychoices
Posted by 80choices at 11:50 AM