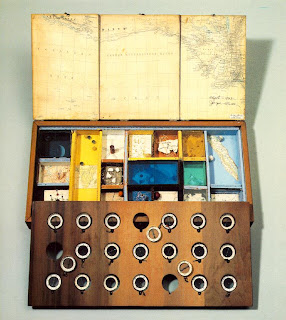 joseph cornell is an artist that i discovered later in my life. his work was not exactly respected as an art while he was producing it. the ability to collect & assemble were traits that went less noticed by mainstream art. he played a major role in the birth of assemblage & brought art into the found object. constructivism & surrealism can be found in his boxed assemblages.
cornell's boxes had the sense of architecture & the experimentation of fantasy. another amazing attribute to his work is the capability of it to interact with its viewer. many of his boxes are meant to be handle. the notion of touching someone else's art is more than alluring. for me it's desired.
he pushed on creatively & moved into experimental film. the result, rose hobart, became perhaps the most famous surrealist short film. it was a 19 minute short using snippets from the motion picture 'east of borneo' & shots of an actual ecclipse. debuting in 1936, it was projected through blue glass & slowed to silent film speed. the original soundtrack was removed & replaced with two songs by nestor amaral. salvador dali was in attendance & later kicked over the projector while labeling cornell a thief. alas, joseph was not a thief, but rather a more humble creator who inadvertently manifested what salvador had only dreamt!
~eightychoices
Posted by 80choices at 3:00 PM